A newly leaked photo of a mid-range Android smartphone from Samsung for Sprint’s 4G LTE network had recently surfaced. The device resembles the leaked Samsung Jasper for rival Verizon’s network and features a design that closely resembles that of the Samsung Droid Charge. The Sprint Samsung leaked phone goes by the model number SPH-M950 and will feature specs that are competitive with the leaked LG Cayenne for Sprint’s network.

However, unlike the Cayenne, the Samsung SPH-M950, which has a codename of Galaxy Reverb, won’t have a sliding hardware QWERTY keyboard. 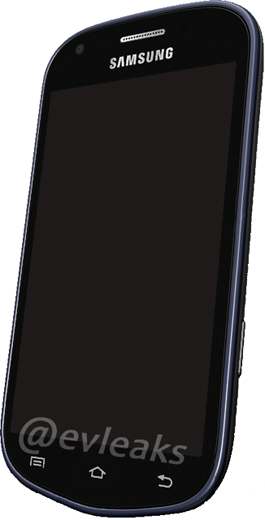 The image of the Reverb was initially posted by Twitter user @evleaks and was re-posted on Brief Mobile.

That said, the device will feature a dual-core Qualcomm Snapdragon S4 processor clocked at 1.4 GHz and the device will have a 4-inch WVGA resolution touchscreen display similar to the LG Cayenne.

The Sprint Galaxy Reverb by Samsung will have 768 MB RAM, a 5-megapixel rear-facing camera, front-facing camera, and will launch with Android 4.0 Ice Cream Sandwich.

While the design of the Galaxy Reverb appears to resemble the Samsung Jasper rumored for Verizon, the main differences between the two devices would be the Android navigation buttons. The Reverb utilizes a button arrangement that more closely resembles the Samsung Galaxy S III with menu, home, and back keys. The Jasper on the other hand utilizes a button layout that’s more consistent with traditional stock Android devices like the Galaxy Nexus, but adds in a fourth menu button. Both the Reverb and the Jasper utilize capacitive touch buttons.

The Reverb would be a mid-range device slotting in under the Galaxy S III on Sprint’s network.