It looks like Verizon and Samsung may be back at it again with a model that looks to be the successor to the Droid Charge, which was the second 4G LTE smartphone that debuted on Verizon’s LTE network. The new model has a number of SCH-i200 and is codenamed Jasper. It’s unclear what Verizon will brand the phone as when it launches on the carrier’s 4G LTE network.

The Jasper appears to be a scaled down mid-range edition of the Samsung’s flagship Galaxy S III smartphone, which is also available on Verizon’s network in the U.S.

The picture was initially posted by Twitter user @evleaks but the image has seemingly been removed. 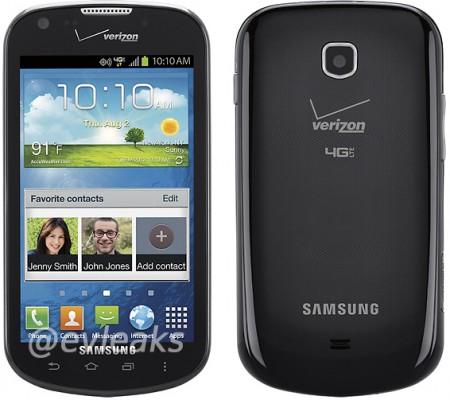 What’s interesting about this smartphone is that it appears that the Jasper uses a series of four capacitive Android navigation buttons just below the display. The buttons are: bad, home, multitasking, and menu. These keys differ from the Google experience Galaxy Nexus, which has a back, home, and multitasking key on the display and no menu button. The keys also differ from the button arrangement on the Galaxy S III smartphone.

The device has a Qualcomm Snapdragon S4 CPU along with Android 4.0 Ice Cream Sandwich, like that found on the Galaxy S III. However, unlike the Galaxy S III, which has a rather large 720p HD Super AMOLED display, the Jasper is bound by a display of unknown size and technology that has a resolution of WVGA. The device will also bear Samsung’s proprietary TouchWiz UI.

At this point, it’s unclear if Samsung is using its Super AMOLED Plus display, which was the non-PenTile display technology that was found on the Samsung Droid Charge.

Right now, it’s unclear when this mid-range model will launch on Verizon.