A leaked slide from Samsung may hint at a forthcoming, yet unannounced third-generation flagship Android smartphone known as the Galaxy S III. The phone will merge some designs from the rumored Nexus Prime and from the Galaxy S II, but according to a tipster to Phandroid, the Galaxy S III may have a different design aesthetic than the current S II to avoid potential legal problems with Apple, of which Samsung is currently engaged in a series of legal battles with. Samsung is said to be launching the device with Android Ice Cream Sandwich, but is said to retain the four capacitive touch buttons just below the display on the Galaxy S III. 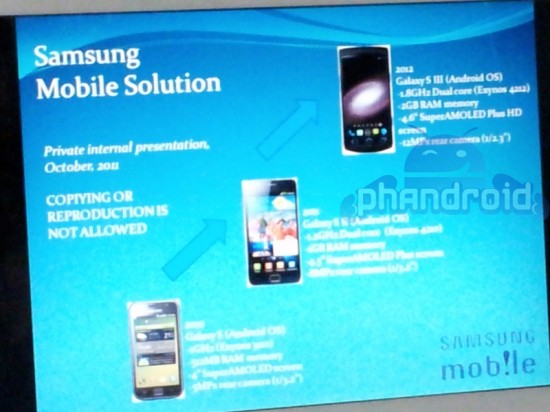 According to the information contained in the leak, the Galaxy S III will utilize a dual-core Exynos chipset clocked at 1.8 GHz–the maximum clock speed currently for Exynos is 1.5 GHz. The device will have an impressive 2 GB of RAM, if true, which is up from the 1 GB RAM available on some of today’s high-end handsets, and will feature a 12-megapixel camera, 4.6-inch Super AMOLED Plus HD display, and support for NFC and 4G LTE technologies. The Galaxy S III will utilize a flat display, unliked the rumored curved glass display on the forthcoming Nexus Prime, Galaxy Nexus, and Nexus S lines.

At this time, the information leaked should be considered speculation as it is unverified.