Leaked photos of Sprint’s variant of the HTC One X Android smartphone have emerged, showing a device that’s more angular than curved. In prior leaks, the device is rumored to be called the HTC EVO One, which would place the HTC flagship in Sprint’s EVO franchise, which so far includes the HTC EVO 4G, the HTC EVO Shift 4G, the HTC EVO 3D, and the HTC EVO Design 4G smartphones.

The latest EVO One’s cleaner, straighter lines resembles the HTC EVO 3D, especially the top portion where the earpiece speaker rests as seen on the leaked photos published on pocketnow. Its design elements from the leaked photo suggests that the phone, which would share a lot of its specs DNA with the One X line, would take on many of the EVO 3D’s aesthetics genes. 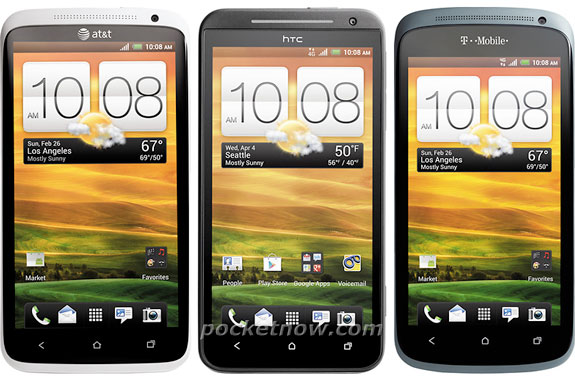 The phone is speculated to resemble the AT&T version of the HTC One X, which would come with a dual-core Snapdragon S4 processor rather than the quad-core NVIDIA Tegra 3 CPU found on the international version. On paper, consumers may be lead to believe that quad-core trumps dual-core, but early benchmarks suggest that the Snapdragon S4 could hold its own grounds and could beat the Tegra 3 in a number of tests.

The HTC EVO One is rumored to also have a beefier battery than both the international GSM/HSPA+ version as well as the AT&T LTE 4G edition. This would be good news for users on the EVO franchise as previous 4G WiMax EVO releases on Sprint’s have not had as long of battery life as anticipated. With 4G LTE being a battery hog as well as a large 4.7-inch 720p HD display, the extra battery life will be very much welcomed with power users who can consumer unlimited data still on the Now Network.

Both Sprint and HTC are scheduled to have an event on April 4th, tomorrow, so we should know more if the outfits are introducing the HTC EVO One at that event.