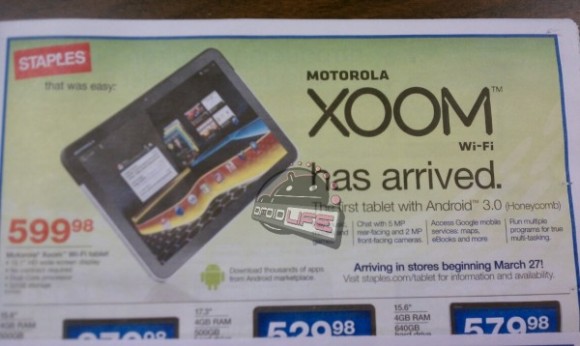 The Motorola Xoom, which is currently available only through Verizon Wireless in the U.S. with integrated 3G that will get upgraded to 4G LTE support, will also be coming soon with a $600 WiFi-only version, a full $200 cheaper than the Verizon edition. That model, which eschews any mobile broadband wireless support, will retain all of the Xoom’s heralded feature including its near-10-inch 16:9 1,280 X 800 display, NVIDIA Tegra 2 dual-core processor, dual-camera support, and Android 3.0 Honeycomb experience. A leaked advertisement from Staples reveals that the Xoom may be dropping on March 27th, according to Droid-Life.

The lower entry price point of a WiFi-only Xoom would match Apple’s iPad 2 pricing for the 32 GB WiFi-only second-generation Apple slate. While the Xoom is said to support Adobe Flash 10.2 via a future software update, better cameras, and dual stereo speakers, Apple’s slate with the A5 CPU offers better performance, better battery life, and more apps.