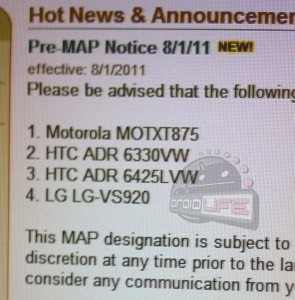 Three new Verizon Wireless high-end devices were shown in a newly leaked Verizon document that were sent to retailers for guidance on the minimum advertised price, or MAP. The list includes the Motorola Droid Bionic, which was confirmed by Motorola CEO Sanjay Jha to launch in September, the venerable and powerful HTC Vigor, which may succeed the HTC Thunderbolt, and an LG device that so far has yet to be revealed but is speculated to be a successor to the Netflix-enabled LG Revolution.

Interestingly enough, the leaked MAP document reveals the device names, but the screen shot does not reveal the pricing information.

These devices will mark the second wave of 4G LTE superphones available on Verizon Wireless complete with high-end features of today. When the first wave of LTE smartphones were launched–the HTC Thunderbolt, Samsung Droid Charge, and LG Revolution–those devices were straddling yesterday’s specs and today’s specs with WVGA displays and single-core processors. These new devices will boost performance and provide the specs to carry users forward into tomorrow.

For one, the Motorola Droid Bionic will come equipped with a dual-core Texas Instruments OMAP4 chipset. The HTC Vigor will increase the performance to a 1.5 GHz Qualcomm Snapdragon CPU complete with the Adreno 220 GPU. Like the latest crop of HTC superphones, the Vigor may also sport a qHD display and will join the Droid Bionic in offering high resolution screens on Android.

The LG device’s specs are currently unknown, but its model number LG-VS920 could suggest that the device will be an update to the LG Revolution, which sported the LG-VS910 model number.

There is also a last device from HTC that’s on the list. There isn’t much details about that one, but it is speculated that the HTC device may be just a silver refresh of the HTC Droid Incredble 2.

For those who haven’t joined the 4G LTE revolution on Verizon Wireless, are these more powerful and more capable devices enough to get you to upgrade?