Just discovered a great new app? Want to share that app discovery with your friend over lunch? Well, there’s an Apple patent for that, and hopefully the feature will be headed to an iPhone, iPod Touch, or iPad near you.

Apple had filed for a patent for the process of app sharing. Essentially if you discovered a new game and want to share it with a nearby iPhone owner, all you would need to do is create a peer-to-peer ad-hoc network using either WiFi or Bluetooth and transfer the game file that way.

The game would be embedded with codes and instructions, hidden from your friend. These codes, established by the developer, can set limitations, such as the number of times the game can be shared, how long it can be shared for, and any other stipulations such as playable levels while in sharing mode. Similar to e-books sharing function, like those on Barnes & Nobles Lend Me feature, app sharing, as Apple envisions, can be used to incite excitement from your peers and those around you in the hopes that they too would get immersed in the game and purchase the title after the time period expires.

Moreover, users who use a public and shared network, like a WiFi network at a coffee house, can leave behind the application for future users to discover as well.

It looks like unlike book publishers, who may want to impose strict limitations on sharing, Apple wants users to share with as many people as possible–a good strategy if the game or app is good.

The company also mentions rewarding people for sharing. If you shared an app with a friend, and the friend later buys the app, Apple wants to implement a mechanism so that you’ll earn some sort of reward or commission! Developers can reward you with a cash commission, coupon codes for future purchases, or special incentives. 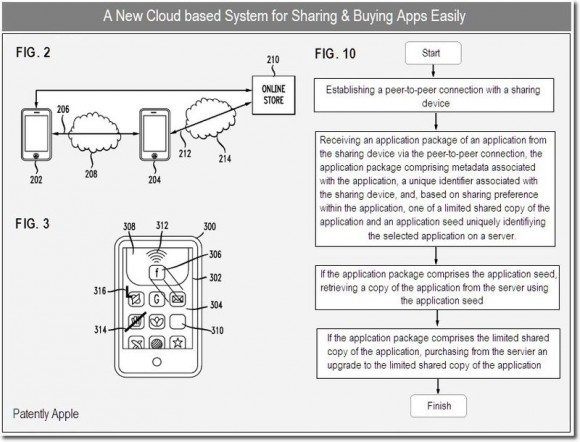 I think the idea is a great idea and may help Apple defend its policy of not having trials or demoes in the App Store. With app sharing, you essentially get to try or, or sample the app, for set period with either full functionality or limited functionality, to help you decide if you want to purchase the app in the future. By giving users a taste of the app, it may help to spur more sales in the App Store.