LG wants to “share the genius” of its new smartphone with the U.S. on May 1, at an event in New York City.

According to Engadget LG recently sent out invitations to the New York event where the company invites press to “capture the spotlight in true brilliance.” The two quotes on the invitation don’t say much about what phone LG will announce at the event, but there are a number of possibilities.

It’s possible that LG will use the event to launch the LG Optimus G Pro in the U.S. The 5.5-inch phone is already available in both Korea and Japan, but the company has yet to announce the phone for the U.S. or other Western markets. The Optimus G Pro looks a lot like the Samsung Galaxy Note 2, though it has a higher resolution 1080p display and no stylus. 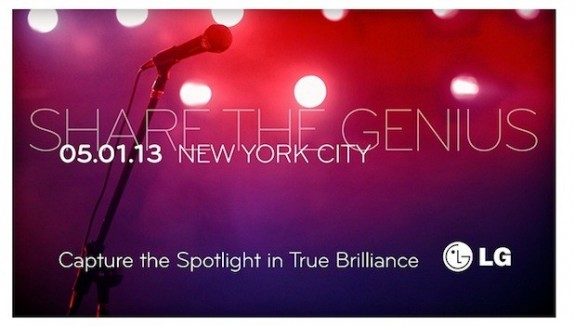 Unlike LG’s last phablet to make to the U.S., the Optimus Vu (Verizon called it the LG Intuition), the Optimus G Pro has a widescreen display like the majority of other smartphones.

The LG Optimus G Pro also features a quad-core 1.7 GHz Snapdragon 600 processor, the same processor that’s inside the HTC One and the U.S. variant of the Galaxy S4. Recent rumors said the Optimus G Pro would come to the U.S. sometime in Q2 2013, which makes a May 1 announcement seem very likely.

There’s also a chance that LG could announce a next generation of the Optimus G, though that seems unlikely. There weren’t any leaks for such a smartphone, and LG has a tendency to announce phones in its native South Korea or Japan first.

There’s also no hint as to which carriers might carry the next LG phone to make it to the U.S. The current LG Optimus G is available on both AT&T and Sprint in the U.S., so it seems likely that at least one of those carriers will offer the next LG Optimus G Pro, or whatever phone LG announces in two weeks.