Ahead of the launch of LG’s G2 smartphone in early August, it looks like the South Korean smartphone-maker jumped the gun and introduced a new accessory called the QuickWindow case. The cover case is similar to Samsung’s S View Flip Cover for the competing Glaaxy S4 in that it will offer protection for the front of the device through a flap, or cover, and will have a window cut out to display important information even when the cover is closed.

The QuickCover case will be available in a number of different colors, including black, white, pink, purple, blue, mint, and yellow. The utility of the case is that users will have some screen protection against dust, dirt, and scratches, particularly when the phone is housed inside a pocket or bag, and will also give users access to information at a glance without having to open the cover. Pricing was not announced for the QuickCover, but don’t expect the flip case to be cheap as the competing Galaxy S4 S View Flip Cover was priced at around $60 at launch. 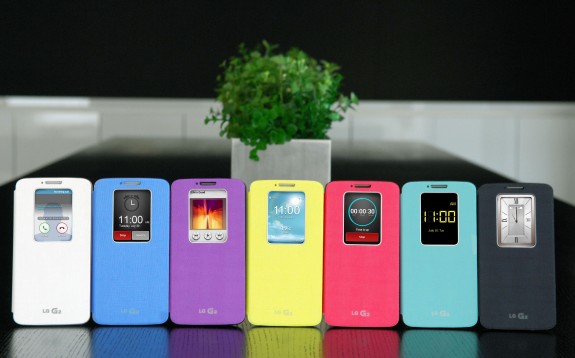 When the cover is on, users can still have access to music, incoming calls, messages, and emails through LG’s proprietary QuickWindows UX interface, according to the company. It’s unclear if developers will be able to always leverage the smaller screen as a ticker for constantly updating information, like update to financial news or stocks. The impact to battery life is unclear at this point.

The LG G2 is expected to have a button-less front design and the power and volume buttons are speculated to have been moved to the rear of the device in a new design choice made by LG.

The device is expected to arrive on at least Verizon Wireless in the U.S. with availability slated in September.