U.S. readers should look away now as LG has announced an Android smartphone with 4G LTE capabilities as well as dual-core processing and a high resolution 720p HD display for its home market in South Korea. It’s unclear if LG’s second LTE handset–following the LG Revolution’s debut on Verizon Wireless in the U.S.–will hit U.S. shores, but this high-end handset has specs that will make many geeks drool.

For starters, it supports 4G LTE, which delivers much faster download and upload speeds than the 3G technology that it hopes to replace. At least in the U.S., Verizon Wireless is promising that its mobile 4G LTE broadband speeds are up to ten times faster than its 3G CDMA/EVDO speeds. The carrier promises that download speeds are up to 15 Mbps. 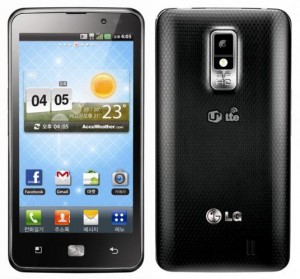 The device will be among the first devices to get a high resolution 720p HD display. The 4.5-inch screen of the Optimus LTE with HD display in South Korea will have a resolution of 1280 X 720 pixels, giving the device a 322 pixels-per-inch resolution.

Running on Android 2.3 Gingerbread, the Optimus LTE will be powered by a dual-core 1.5 GHz CPU. The device will have an 8-megapixel rear-facing camera with LED flash, a bump from the 5-megapixel shooter on the LG Revolution, a front-facing camera, 1 GB RAM, and capacious 1830 mAh battery. The handset maintains a relatively slim profile with dimensions measuring 132.9 x 67.9 x 10.4 mm.

Hopefully, this handset will make it in some form to either Verizon or AT&T, the latter is building out its LTE network after an initial launch in five markets in the U.S. recently.

SEOUL, Oct. 4, 2011 – LG Electronics (LG) today announced the Korean market launch of LG Optimus LTE, the first mobile device in the country to offer 4G connectivity with the highest resolution IPS display available on a smartphone. Developed in close collaboration with sister company LG Display, Optimus LTE features a striking 4.5–inch “True HD IPS” display which offers advanced resolution, brightness and clarity and shows colors in their most natural tones, as they were meant to be seen.

“LG Optimus LTE is the first smartphone in Korea to offer vivid and clear HD content on a 4G network,” said Dr. Jong-seok Park, President and CEO of LG Electronics Mobile Communications Company. “Our goal is to be a leading player in LTE devices by continuously offering best-in-class products based on our LTE patents and know-how.”