A new smartphone is headed to AT&T later this month in hopes of stealing away some customers patiently awaiting the upcoming Samsung Galaxy Note 4. It’s called the LG G Vista, which was also released last week on Verizon Wireless offering those on a budget a larger display.

The new LG G Vista is extremely similar to the popular flagship LG G3 that was revealed back in May and went on sale last month, only LG’s increased the screen size to 5.7-inches while making the handset more affordable for those seeking a cheaper smartphone option.

Over the past few months more and more LG smartphones have continued to appear. They now have the flagship LG G3, a smaller LG G3 Mini on the way, the LG G3 Stylus which leaked earlier this week, and now a budget friendly LG G Vista for carriers in the United States. Read on for more details on this phablet from LG. 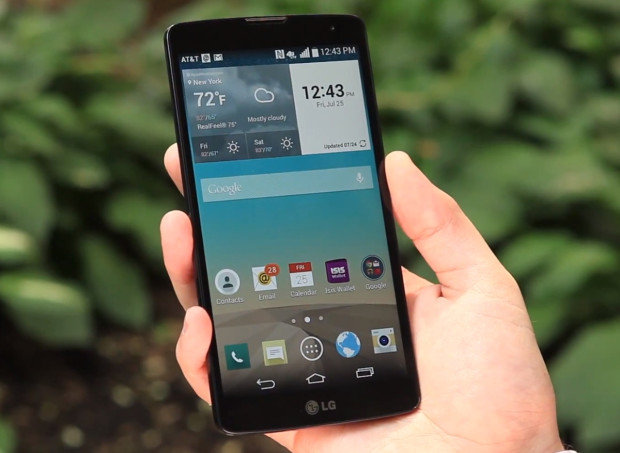 This morning, AT&T announced a new budget-friendly smartphone will arrive on carrier shelves and be available online starting August 22nd. The new LG G Vista offers most of the same features, design, and software as the new LG G3, but won’t break the bank at the same time.

The LG G Vista looks just like the new LG G3 but a few of the features have been swapped out for different options. That being said, the G Vista looks to be one of the best smartphones around in terms of battery life, as it sports a massive 3,200 mAh battery (bigger than the LG G3) while offering a lower screen resolution which should keep the phone charged up all day long.

If the smaller screen of the Galaxy S5, HTC One M8, upcoming iPhone 6, or even the large 5.5-inch LG G3 isn’t what you want, the LG G Vista may be worth considering. Here’s the full rundown.

As you can see from the details above this is still a rather high end device, although it can’t compete with some of the other most popular devices on paper. The screen resolution, internal storage, processor, RAM, and even the camera on back are all slightly downgraded from the LG G3.

That being said, this is still a large 5.7-inch device with impressive specs, a good camera, and excellent battery life that will be available later this month well ahead of the incoming Galaxy Note 4. While we expect the Note 4 to have some of the best features of any smartphone released thus far in 2014, it likely won’t launch in the United States until October after the early September reveal.

All the software features we loved in our LG G3 review are also included. And some of those include dual-window mode, KnockCODE, one-handed operation, LG’s smart keyboard, and much more. Check out the quick teaser release video from LG and AT&T.

So how cheap or “affordable” is this pretty impressive new LG G Vista for AT&T? Really cheap. AT&T will be offering the new G Vista starting August 22nd for only $49 with a new 2-year contract, compared to the $199 for the G3, and likely $299 asking price (on contract) for the upcoming Galaxy Note 4.

The LG G Vista is $49.99 with a new 2-year contract, $14.80 a month for 18 months, or can be purchased outright for only $354. It isn’t a premium smartphone with every top-tier feature available in mobile technology, but for those wanting an all around excellent device with a big display, without the big price tag, the LG G Vista is worth checking out.