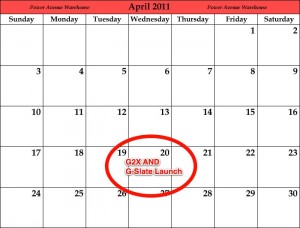 T-Mobile USA and LG are expected to be announcing the retail availability of its latest G-franchise which consists of the G-Slate, a re-badged version of the Optimus Pad, and the LG G2X, which is expected as a re-branded version of the LG Optimus 2X. The anticipated announcement may happen next week at the CTIA tradeshow, which is the wireless industry’s showcase of smartphones and tablets, and the release date may be April 20th if a report from TmoNews is accurate. The G-Slate was initially unveiled at the Consumer Electronics Show earlier this year.

Both the LG G2x and the LG G-Slate will feature NVIDIA’s Tegra 2 dual-core processors. The LG G2X will be T-Mobile’s first dual-core smartphone and will help the carrier compete with the already released Motorola Atrix 4G on AT&T and the yet to be released Droid Bionic on Verizon Wireless. As T-Mobile USA is left without a flagship iPad, the G-Slate will not only compete against the rival Android 3.0 Honeycomb Motorola Xoom tablet on Verizon Wireless, but also Apple’s latest iPad running the iOS software. Unlike the rival tablets, the G-Slate will sport dual rear-facing cameras for capturing videos in 3D.

With the G franchise–which probably stands for Google, T-Mobile will have several different Android product lines. The G line has included the T-Mobile G1 and G2 smartphones in the past made by HTC. Unlike other Android phones in the carrier’s lineup, those product maintained a more clean Android user experience by eschewing HTC’s HTC Sense customizations in favor of a more stock Android appearance. The carrier also maintains a consumer-centric myTouch product line and will now also be featuring Android on the Sidekick line.