The LG G3 is one of the best Android phones on the market. With a beautiful display and sharp design there are already many shoppers comparing the LG G3 vs iPhone 6 rumors to figure out which phone is the best one to buy in 2014. We’ll take a look at the Verizon LG G3 and an iPhone 6 mock-up to show you how the two devices compare in size and in rumored features to help you decide.

Although we don’t own a working iPhone 6 at this time, we can compare an iPhone 6 mock-up and iPhone 6 rumors with a Verizon LG G3 that is on store shelves now. This is the same device available on multiple U.S. carriers, although the included apps vary by carrier. 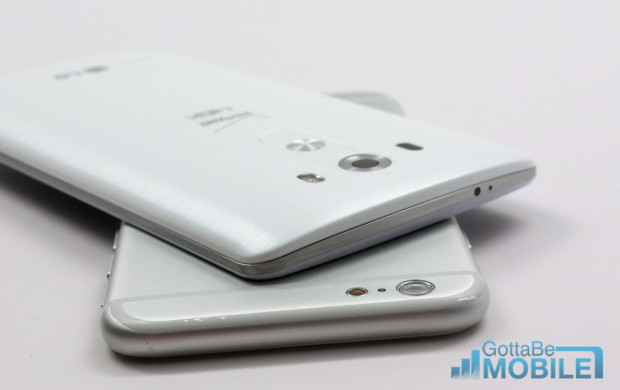 Learn how the LG G3 vs iPhone 6 comparison stacks up using a new G3 and iPhone 6 rumors.

It’s clear the LG G3 is an amazing Android smartphone that offers software features that the iPhone 6 won’t unless Apple delivers a big surprise in September. Combine this with a large 5.5-inch 2k display that delivers impressive detail and you’ll understand why this deserves a comparison to the rumored iPhone 6.

After a minor update last year the iPhone 6 design is all new for 2014, and there is a bigger screen and new features packed in as well. This is the second time Apple will increase the iPhone screen size. We’ll compare a 4.7-inch iPhone 6 mock-up to the LG G3 today. Apple may also sell a iPhone 6 with a 5.5-inch display in 2014 as well.

It’s always possible that these iPhone 6 rumors and iPhone 6 specs will change as the release approaches, so keep in mind the iPhone 6 parts of this comparison are not final. The Verizon LG G3 is on sale now, and all specs and features are current.

The seven-minute LG G3 vs iPhone 6 video below shows how the two devices compare on several levels, and we dive deeper into the comparison in the sections below.

The LG G3 is larger than the 4.7-inch iPhone 6 mock-up, but not that much considering it offers a larger 5.5-inch display. It is big enough that LG includes some one-handed operation modes in the software to help users who can’t reach all corners of the display. 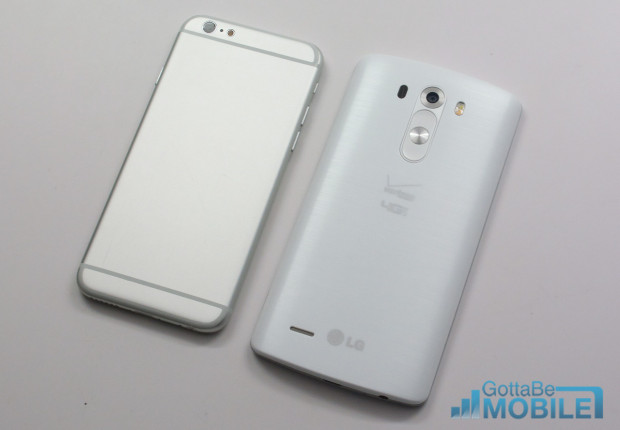 Apple offers aluminum and LG offers plastic, but this plastic feels much nicer than old phones and offers access to the battery and MicroSD storage.

The back of the LG G3 pulls off to let users swap batteries and to add a MicroSD card for more storage. This is not something the iPhone 6 offers based on any leaks and on Apple’s history of sealed iPhone design.

The back of the iPhone 6 is aluminum, and our mock-up includes white lines that one report claims will not be as obvious on a final design. The back of the LG G3 is plastic, but it feels more like a ceramic, offering a premium feel despite plastic roots. 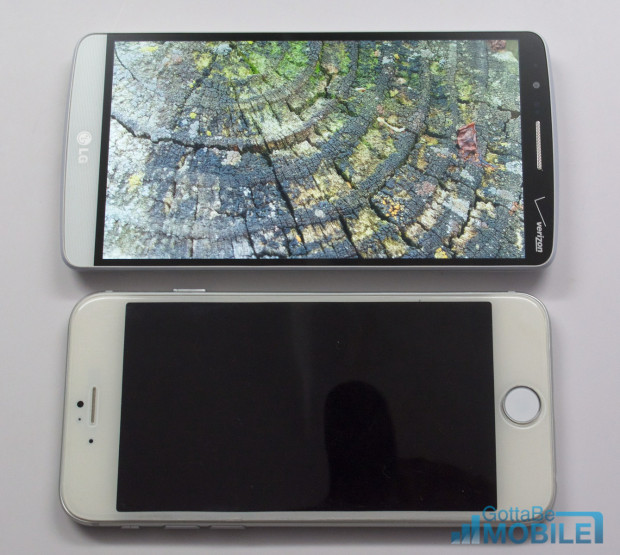 The LG G3 display is stunning and should offer a much higher resolution and pixel density than the iPhone 6.

Simply put the LG G3 offers a higher resolution display that is capable of showing more detail in photos and videos than the current iPhone 5s and Galaxy S5, and it should deliver a similar performance boost over the iPhone 6, if those display specs are true. The video below shows a close up of the LG G3 display, and is best viewed in full HD.

Another key difference is the camera on each phone. We don’t know a lot about the iPhone 6 camera at this point. Some rumors claim Apple plans to offer an 8MP sensor with larger pixels, while other reports suggest optical image stabilization or electronic image stabilization are in the works. One rumor also claims Apple will use a 13MP Sony sensor in the iPhone 6. Based on the iOS 8 beta we expect the iPhone 6 camera software will include the standard options like Photo, Video, Panorama, Slow motion, Burst and the new tim-lapse and timer options as well. 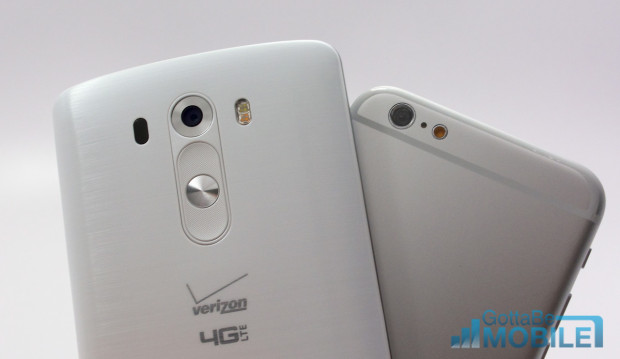 The LG G3 includes laser focus, but the iPhone 6 camera rumors are still not clear.

The LG G3 offers a 13MP camera with a dual-LED flash, like the iPhone 5s’ pill shaped flash. The LG G3 includes a laser focus feature that allows the G3 camera to focus on a subject incredibly fast. In our experience this is not a gimmick, but a feature that works very well.

The LG G3 camera app includes an auto mode, panorama mode, timer and HDR settings. Users can also take a picture by saying smile or cheese. There is also support for burst photos, gesture photos, dual camera to put the G3 holder in the photo and Magic Focus. Magic Focus takes photos at a variety of focus levels so that users can adjust the focus later for a more dramatic shot.

Apple and LG offer different methods of unlocking their smartphones. Both of these offer a benefit to the user, and ultimately it may come down to what you need most from your smartphone security option. 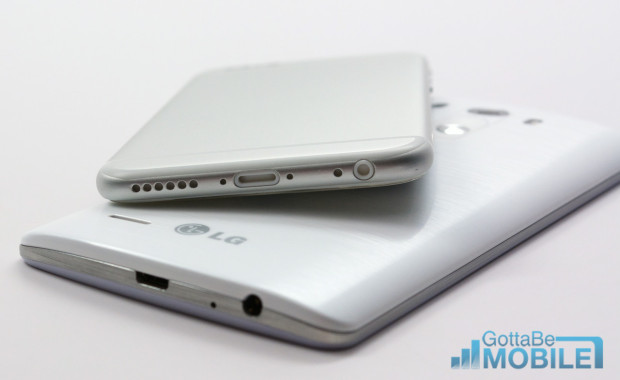 Security varies between the two devices, but each option offers some benefits.

The LG G3 features a knock code, that lets users tap on the screen to unlock the phone. This allows for a personal knock code and users can activate it when the display is completely off, for fast access to the home screen.

We know the new iPhone will run iOS 8, a new version of iPhone software that Apple announced in June. if tradition holds Apple will include some special iPhone 6 only iOS 8 features that the company announces during an iPhone 6 event in september.

You can also check out iOS 8 vs iOS 7 for iPhone owners that showcases the new features from an iPhone standpoint. 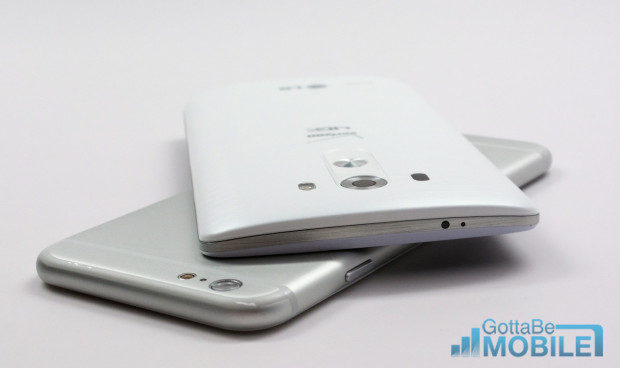 The LG G3 packs in an IR port on the top of the device to let users remote control a TV.

The LG G3 runs Android 4.4.2, which is a recent version, and will likely see an update to Android L that Google will release later this year. LG packs in a lot of features on top of Android 4.4.2 including the ability to run two apps on-screen at once, one app floating over others and a quick remote. There is also fast access to settings and a personal hotspot in the notification drawer. The LG G3 notifications are also much nicer than anything Apple offers in iOS 7 or iOS 8.

We’ll have a better look at the iPhone 6 features as the rumors offer more and when Apple makes an official announcement that rumors suggest is coming in September.