HTC worked with Google to create the first Nexus and Samsung followed-up to create the most recent two Nexus smartphones. LG may get its turn next. According to LG’s smartphone head Ramchan Woo, the company is in heavy discussions to create the next-generation Google-branded Nexus product. Woo says, “We’re working on it,” but did not give any additional details. The device could range from being a smartphone, to a tablet, to a Google entertainment system as most recently rumored.

Being a Nexus partner would be a big deal as it would give LG early access to Android code and required specifications to build a whole line of next-generation products. As Google specifically pair its OS and chipset together, LG would be privy to codes and the architecture behind the next-generation Android OS release ahead of its rivals. For example, with Honeycomb, Google standardized on Tegra 2 chipsets, though manufacturers eventually worked with other chip-makers to bring other chipsets to support Honeycomb.

The next iteration of Android, known as Android 5.0 Jelly Bean, is rumored to be announced this summer at the Google I/O developer conference. That version of the OS will bring a desktop interface support to bring a Motorola Lapdock-like accessory to all Android handsets. Google’s Android Jelly Bean will also face some competition, if these early speculations prove true, from Ubuntu, which is working with device-makers to bring a desktop UI when the phones are docked.

And though LG is jockeying with its rivals to be the next producer of the Nexus, the company is at the same time providing harsh words on Google. The company spoke freely to CNET at Mobile World Congress and told the publication that it prefers to use its own skins and UIs to customize Android, stating that it could in fact build a better UI than Google. Woo says, “We know the customer data better than Google,” and that some people are uncomfortable with stock Android. 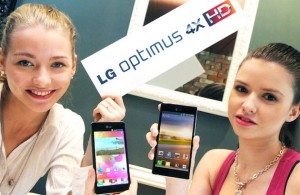 As LG continues to provide for a custom UI on non-Nexus devices, the problem there is the delay in time between when Google releases an Android OS update to when LG launches the update on its own released devices. The reasoning is that LG has to alter Android, port and/or create a UI overlay, and then ship that upgrade to carriers for certification and testing before it can get pushed to customers. Rivals Microsoft and Apple have criticized the Android skinning phenomenon as adding to Android‘s fragmentation.

Having LG as a Nexus manufacturer may help Google alleviate fears that the Android-maker will play favorites to Motorola once the acquisition of Motorola Mobility goes through. In the past, Google had stated that it was purchasing Motorola specifically for the company’s large patent portfolio, but concerns over a Google-run Android empire emerged a few days ago when news that Google may name an insider to run Motorola Mobility after current Moto CEO Sanjay Jha leaves.