In the latest Wall Street Journal report, it looks like LG had a contract with Google to manufacture the first Android smartphone. Instead, as we now know, LG had walked away from the deal and HTC stole the show with the HTC G1, the world’s first Android smartphone in collaboration with Google, Qualcomm, and T-Mobile USA. The move that LG made with Google’s Android OS is akin to what reportedly went on a few years ago when Apple had initially approached Verizon to carry the first iPhone. Instead, as the two could never agree, Verizon turned down the offer and AT&T swooped in to launch the debut iPhone and maintained exclusivity in the U.S. for several more generations of the Apple flagship device. Fortunately, though, in both cases, LG and Verizon had gone full circles as LG is now making smartphones running Google’s mobile operating system and Verizon has since pledged its support and released the CDMA-based iPhone 4 for its own CDMA network in the U.S.

It’s unclear what had transpired behind closed doors with Google and LG. Perhaps, with Android being a relatively unknown brand at the time, it wasn’t clear if an investment in Android was a smart idea. The HTC G1, though was a popular phone among Android geeks, did not sell all that many units, and Google did admit that Android didn’t really take off until it had partnered with Verizon Wireless and Motorola to launch the Droid 1 and the massive ad campaigns behind that device.

Also, at the time, LG had a good competitor for the Apple iPhone, a touchscreen-only LG Prada smartphone. LG had initially thought that its work in the touchscreen form factor would give it a viable iPhone contender and the company may have felt like it could have done it alone without Google. 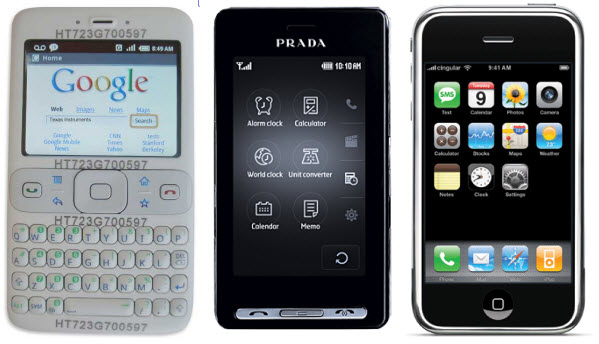 Additionally at the time, LG probably wanted to focus on the touchscreen space, and from the early leaked prototypes of the Android smartphone it looked like Google was gunning for Research in Motion rather than Apple, which was not part of LG’s strategy at the time. The prototype that Google had showed off a touchscreen device with a front-facing keyboard, somewhat similar in scope to the BlackBerry Bold 9900 series, rather than a full touch device.