It looks like LG cannot wait for Mobile World Congress to start later this month as the smartphone-maker has already unveiled its Optimus Vu Android smartphone ahead of the Barcelona trade show. The phone, which was previously leaked, has a 5-inch display with an iPad-like 4:3 resolution that would compete in a similar space as Samsung’s Galaxy Note, which is recently available on AT&T’s 4G LTE network for purchase in the U.S. 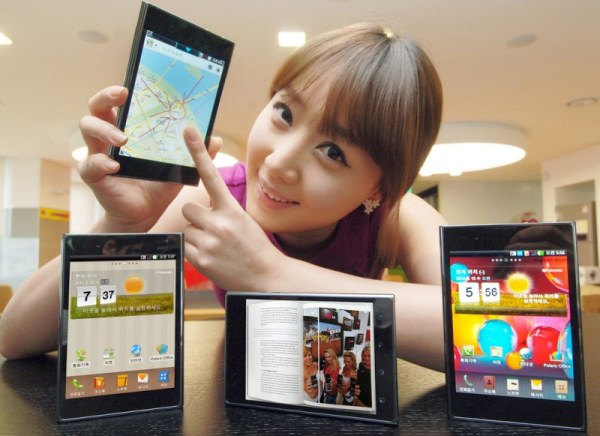 The phone has a bright Nova-like display with IPS screen technology, a 1024 X 768 resolution, and a 5-inch touchscreen. Compared to the 1280 X 800 resolution on the Galaxy Note, the Optimus Vu has a slightly decreased resolution but may be more optimized for reading documents, books, magazines, and notes thanks to the 4:3 resolution. The company’s press released notes that the Optimus Vu’s display provides for ‘viewing pleasure maximization.’

The 5-inch form factor was initially popularized by the Dell Streak 5, which unfortunately did not gain as much momentum as Dell had anticipated. The Dell Streak 5’s 5-inch screen came in at a WVGA resolution, and offered a hybrid user experience between a phone and tablet, straddling both form factors. As such, the Dell Streak 5, Galaxy Note, and Optimus Vu have been called a a ‘phone let’ or a ‘phablet’ denoting both mobile computing categories.

The device has been confirmed with an 8-megapixel camera and a 1.5 GHz dual-core Qualcomm camera, placing it on par with the U.S. release of the Galaxy Note–the international Galaxy Note release utilized an Exynos chipset. LG also promises an Android 4.0 Ice Cream Sandwich update to its phablet within the first three months of release.

LG also customized the Android Gingerbread OS with its own LG UI. The device also has a digital pen support that works with the Rubberdium pen.

Backed by unparalleled speed and performance from LG’s advanced LTE technology, the Optimus Vu: boasts unmatched productivity. Its unique built-in QuickClip™ hotkey allows users to conveniently capture screenshots and memos with a single push. Jotting notes is also possible with a finger or with the dedicated Rubberdium™ pen.

LG UNVEILS UNIQUE 4:3 RATIO, 5-INCH OPTIMUS VU: AT MWC 2012
With Productivity in Mind, LG Demonstrates its LTE and Display
Leadership with Device that Does, Well, Everything

“The Optimus Vu: was designed to maximize what customers could do with a smart-phone,” said Dr. Jong-seok Park, President and CEO of LG Mobile Communications Company. “By offering an optimal 4:3 ratio viewing experience, 5-inch display combined with superfast LTE technology, Optimus Vu: is just one example of what we can achieve when we combine our best technology with customer needs.”

The large 5-inch display with bright 4:3 aspect ratio makes viewing documents, books, internet and multimedia contents easier and more comfortable. The 4:3 aspect ratio is optimized for viewing to grasp more at a glance and note taking to increase productivity in everyday life. Moreover, IPS display realizes every color in its natural state for the best viewing experience even under bright sunlight.

Backed by unparalleled speed and performance from LG’s advanced LTE technology, the Optimus Vu: boasts unmatched productivity. Its unique built-in QuickClip™ hotkey allows users to conveniently capture screenshots and memos with a single push. Jotting notes is also possible with a finger or with the dedicated Rubberdium™ pen. Among many productive apps installed in the Optimus Vu:, the included Polaris Office allows users to open any document, spreadsheet or presentation while on the go.

At only 8.5mm, the Optimus Vu: is the slimmest among all LTE phones currently on the market and is perfectly suited for a hand and fits comfortably in a jacket pocket. Despite the large 2,080mAh battery, the Optimus Vu: adopts LG’s exclusive floating mass technology to appear slimmer than its actual dimensions.

In addition to HDMI (High Definition Multimedia Interface) and DLNA (Digital Living Network Alliance), Optimus Vu: comes with 32GB memory and an 8-megapixel camera. While it will initially launch running Android 2.3 Gingerbread, an update to Android 4.0 Ice Cream Sandwich is already in the works.

The Optimus Vu: will be introduced in Korea in March. Additional information on the unique Optimus Vu: can be found at the LG Stand (Hall 8) at MWC 2012 from February 27 to March 1.