There’s a rumor that LG is working on a successor to the popular Nexus 4 smartphone for Google in the form of the LG Megalodon. The device will boast a 5.2-inch OLED display with a 1080p full HD resolution. And according to an anonymous tipster to Android and Me, the device is expected to debut towards the end of the year in October 2013, perhaps around the time of Apple’s rumored iPhone 5S launch.

A previous Nexus 5 rumor had suggested a 5.5-inch display with 1080p HD resolution. 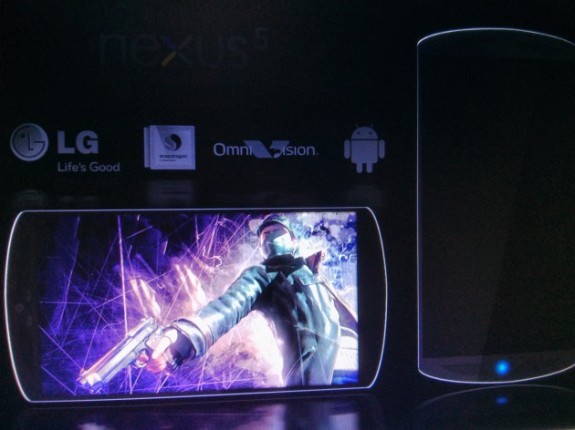 According to Android and Me, the information was tipped to them from someone claiming to work for Google.

An anonymous source, who claims to work for Google, tells us this prototype is the real deal, but we are not sure what to make of it. There is a good chance that some basement dweller is trolling us hard, but this person has an interesting story so we thought it needed to be shared.

The unique thing about the LG Megalodon, which may be selected as the Nexus 5 smartphone, would be that it would be among the first devices to come with Qualcomm’s Snapdragon 800 processor. This would mean that the LG-made device would be among the first to feature Ultra HD 4K video recording. With 4K video recording, you’re going to get four times the resolution of regular HD videos, though you’ll need a 4K display, monitor, or TV to take advantage of the extra video pixels.

Qualcomm had previously stated that its Snapdragon 800 processors will be shipping in commercial devices by the end of the year.

And speaking of recording, the LG Megalodon would have a 16-megapixel camera made by OmniVision. This means that it would have among the highest number of megapixels in mainstream smartphones, besting the 13-megapixel sensor found on the Optimus G, the Galaxy S4, and the Xperia Z. The camera can record 1080p video at up to 60 frames-per-second, and there’s HDR photo and video as well.

And it looks like LG is following HTC’s footsteps with the HTC One in having front-positioned stereo speakers for playback.

And perhaps in a move similar to Samsung’s flagship Galaxy S4, there should be gesture controls as well.

Here are the rest of the specs of the purported Nexus 5, as reported by Taylor Wimberly:

A lot of these specs seem too good to be true and potentially, this could all be a good fake. And even if the Snapdragon 800 processor can handle 4K Ultra HD video recording, LG and Google may not enable that feature as it may be taxing on battery life and there aren’t enough Ultra HD TVs on the market for customers to take advantage of Ultra HD resolution.

The October launch date would mean the device would miss the May Google I/O developer conference.