The new Nexus phone, thought to be called the LG Nexus 4, leaked again in two renders today in addition to a new benchmark which not only revealed its “Mako” codename but also its Android 4.2 operating system.

Both of these leaks come ahead of Google’s highly anticipated Android event on October 29th in New York City where the company figures to outline its Nexus plans. A large part of those plans will likely be the LG Nexus 4, its new Nexus phone, and one that will replace the Samsung Galaxy Nexus as the company’s latest Nexus-branded smartphone.

And while it’s still not announced, we already know quite a bit about the new LG Nexus 4 and today’s leaks only confirm what we thought already. 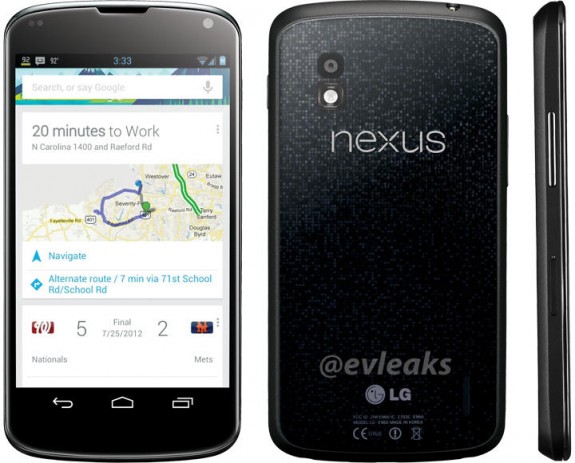 We thought the Nexus backing on the LG Nexus 4 would be multi-colored and that’s still possible even after today’s leak.

Besides Android 4.2, we also see that the device is called ‘Mako’ and carriers with it an HD display. We also see a maximum frequency for the device’s processor which is around 1.5GHz. The device is rumored to possess a quad-core processor clocked at 1.5GHz.

Here is a full outline of its rumored and likely specifications:

The LG Nexus 4 still doesn’t have a release date though it remains possible that it could launch on Google’s Google Play Store shortly after the event on October 29th. We’ve also heard that, at the very least, French carrier SFR will get the Nexus 4 in December.

Fortunately, we only have a few days before we find out all the details for sure.