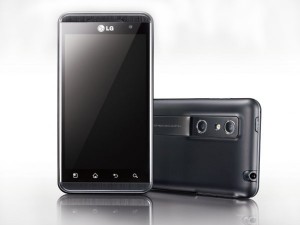 The LG Optimus 3D has not officially launched in Europe, and LG is promoting its glasses-free 3D device with the ability to capture 3D images and record 3D video on its rear dual-lens camera with ‘tri-dual technology,’ which is a dual-core, dual-channel, and dual-memory configuration. The Optimus 3D will also be launched as the LG Thrill 4G in the U.S. through AT&T later this year, and the device features a 4.3-inch WVGA display.

“Tri-Dual architecture opens up a whole new world in smartphone performance,” said Dr. Jong-seok Park, President and CEO of LG Mobile Communications Company. “As the latest offering in our Optimus line-up, we expect there will be significant interest from those who seek the very latest in smartphone technology and are excited about 3D as the next big frontier in mobile devices.”

The company’s tri-dual technology is said to be better than competing single- and dual-core technologies:

With a dual-channel configuration, data transfers take place simultaneously between the dual-core and dual-memory, resulting in noticeably faster performance.

When it launches in the U.S., LG will have to compete against HTC’s EVO 3D on Sprint’s 4G WiMax network. So how do the two phones compare? HTC’s device comes with a higher qHD resolution glasses-free 3D display; as a result, the 4.3-inch display on the HTC device will be a 16:9 aspect ration for HD video watching. However, the Optimus 3D/Thrill 4G can record content in 1080p resolution in 2D where Sprint has now changed its wording to say that 2D and 3D videos are now recorded in 720p resolution. Both devices have dual-rear 5-megapixel cameras and front-facing camera.

Also, the LG device has a dual-core TI OMAP 1 GHz CPU while HTC is using a dual-core Snapdragon 1.2 GHz CPU. While LG is promoting its tri-dual architecture, HTC was promoting the asynchronous processing capabilities of the Snapdragon chipset as a means for better battery life and performance. According to HTC, the asynchronous architecture means that both cores do not need to be fired up at once, and if users are running a non-intensive app, one core can be used, and then both cores can be used to handle more processor-intensive apps or to multitask. This would enable the HTC EVO 3D to maintain good battery life and still deliver the performance of a dual-core chipset when needed.

I was able to spend some time with both the HTC EVO 3D and the LG Optimus 3D at CTIA back in March with pre-production units of both. At the time, it appeared to my eyes that the EVO 3D’s 3D display rendered 3D a bit better than the Optimus 3D. On HTC’s device, 3D seems to pop out more while the LG rep says that 3D on their device was intended to give users more of a ‘depth of field’ rather than making content pop forward. That means that you’ll be able to see deeper in the display, rather than have select contents on the display appear to be coming forward. The surprising thing is that on LG’s sample 3D displays at CES that were not attached to phones, 3D content did visually pop out like on the Sharp-made HTC displays. I’m a bit curious to see what has changed between the naked display versus the ones that are used on the Optimus 3D. It’s uncertain how these 3D experiences will compare with final shipping products from both companies.

Other differences may be how both companies are attacking the content category for glasses-free 3D screens. While HTC is releasing its 3D SDK to content developers to build games and develop for the 3D experience, LG will be releasing a conversion software for users to convert 2D apps and content into 3D content for its smartphone:

Special software allows for real-time conversion of 2D photo and video content into 3D. Free software for converting 2D games will be available for download during the third quarter, letting users enjoy a variety of multimedia content in 3D.

In its press release, LG is saying that the phone will arrive first in Europe, and then will spread out to other countries in over 60 markets in the next several weeks.