Yesterday, it became apparent that the upcoming LG Optimus 3D smartphone might be released on June 20th as Amazon’s UK site had that listed as the probable shipping date. However, that’s not going to be the case as LG has confirmed that the device has been delayed and that they are hoping to get some units by the end of June, although that appears to be shaky. 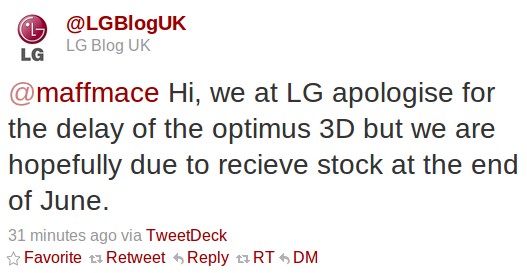 The Optimus 3D was originally announced back at MWC and was labeled the world’s first 3D smartphone. However, it has taken quite awhile to get to shelves and now it appears that another 3D smartphone, the HTC EVO 3D, is going to beat it to market.

Yesterday, Amazon had the phone listed as coming out on the 20th. It was a little suspicious and those suspicions were confirmed when UK carrier Clove confirmed that it wouldn’t have the phone until July 11th. LG then chimed in today and corroborated that by announcing that the LG Optimus 3D had been delayed and that it was expect to get some units by the end of the month.

What this means is that if we’re lucky, we’ll see some Optimus 3D units out and about in the UK in June. More likely though, the Optimus 3D is looking like it will arrive at some point during the month of July.

A bummer for those of you who have been waiting for Europe’s first 3D smartphone, we’re sure of it.