Originally announced back at the Mobile World Congress in February, the LG Optimus 4X HD smartphone is a quad-core device which LG hopes will compete with the likes of the HTC One X and the Samsung Galaxy S III.

We were able to go hands-on with the LG Optimus 4X HD at the CTIA 2012 in New Orleans and get a good look at the Tegra 3-powered device that will, at some point, be heading to the United States.

The first thing that jumps out at you about the LG Optimus 4X HD is the high-definition screen that it has on board. It is a large, 4.7-inch True HD IPS display with 1280 x 720 resolution and it offers vivid colors and good brightness. It’s a shade smaller than the 4.8-inch Super AMOLED HD display that’s found on the Samsung Galaxy S III.

The device also sports 16GB of on-board memory, 1GB of DDR2 memory to handle things like multitasking, an 8MP camera on the rear, a 1.3MP front-facing camera for video chat, and a 2,150mAh battery. 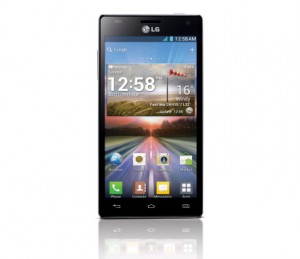 As for the design of the LG Optimus 4X HD, it’s a big, thin rectangle. The device measures in at a mere 8.9mm thin, which is the same type of thicknesses found on Verizon’s Motorola Droid RAZR MAXX.

It will be running Android 4.0 and it will be coming with some custom apps and an LG launcher. The UI seemed to be fairly minimal but it’s unclear how the final version of the device’s software will look.

The LG Optimus 4X HD is slated to hit Asia and Europe sometime during the summer and LG also confirmed to us that it will be coming to the United States. They wouldn’t say which carriers it would be headed to but T-Mobile is a likely destination.

We should know for sure in the months ahead.