Following up on my earlier post about the HTC EVO where I mentioned the lack of mobile hotspots from AT&T and T-Mobile, I found that T-Mo is about to close that gap with the LG Optimus, an Android-based smartphone with hotspot functionality. 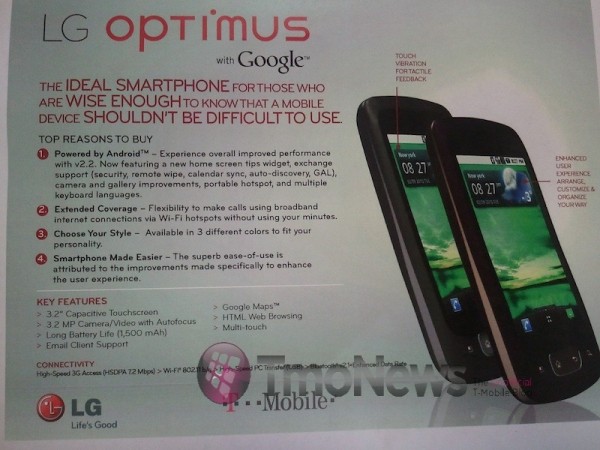 In addition to the usual features of a phone running Android 2.2, the LG Optimus sports a 3.2″ display and 3.2MP camera (video quality not specified). Plus, they’re allowing the use as a mobile hotspot and routing calls via VoIP to avoid using minutes. Interestingly, it lists connectivity via HSDPA up to 7.2Mbps, but not support for the faster HSPA+ I evaluated for T-Mobile. Hopefully this is just an oversight.

Just to clarify, there is an app that allows rooted Android phones to act as mobile hotspots. But if you want to avoid rooting and doing things outside your service contract, it’s better to have that option straight from your carrier.