After having been available in the U.S. through wireless carriers AT&T and Sprint, LG is finally bringing its flagship Optimus G smartphone to Europe. Though on the hardware front, the Optimus G for Europe is similar to the version released in the U.S. with a 720p HD display, quad-core processing, and a nice design, the European version rewards patient mobile buyers with some improvements.

Most notably, the Optimus G lands in Europe with Google’s Android 4.1 Jelly Bean operating system out of the box. In the U.S., the device had debuted with Android 4.0 Ice Cream Sandwich, which means that users did not have access to popular 4.1-only features like Google Now until it is updated to Android 4.1. 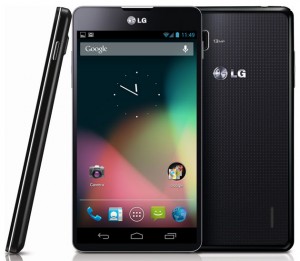 And LG has even added its own touch to the smartphone. The device features an enhanced version of QSlide, a feature that allows Optimus G smartphones to simultask, or perform two different tasks simultaneously. QSlide is different than Samsung’s Multi-View, which allows apps to be run side-by-side on the same screen. Instead, QSlide has a slider that overlaps two apps over each other and users can choose to make the top app as transparent as they need so they can see both apps at the same time. The initial QSlide only worked with the video app, and now QSlide works with the browser, memo, calendar and calculator apps.

If you’re answering your Optimus G in a crowded room and have to take a call, Privacy Keeper allows you to hide the incoming caller ID so those around you can’t see who is calling by glancing at the 4.7-inch Optimus G display. Swiping on an icon will reveal the hidden caller ID info.

Safety Care allows users to send text messages with their location information automatically. This could be triggered if an emergency service–like the police is dialed. You can program your phone so that your spouse or loved ones will get an alert with your location info via text after you hang up with local responders.

In addition to the LG Optimus G, LG recently announced the Optimus G Pro with an even higher resolution 1080p full HD display.