The LG Optimus G, revealed in late September, is officially heading to AT&T and Sprint at some point in the future.

The Optimus G, which is heavily rumored to be the inspiration for the new Nexus device, is going to be heading to the 4G LTE networks of AT&T and Sprint in the future though a specific release date has yet to be announced. We assume that the device will be out at some point this year though the companies remain mum about specifics.

LG has said that it would launch in the U.S. in November so it’s entirely possible that interested parties will have to wait a month. 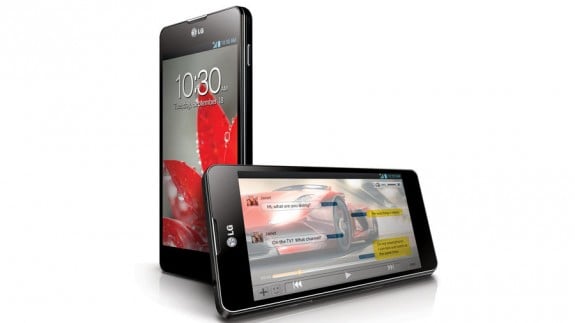 The LG Optimus G is heading to AT&T and Sprint.

It comes with some pretty hefty hardware and it will intrigue Android enthusiasts who are looking for a smartphone with truly top of the line specs. It features not only 4G LTE data speeds, but it also has a quad-core Snapdragon S4 Pro processor, the first device to feature such a combination.

In addition, it will feature a massive 4.7-inch True IPS display with 720p resolution, an advanced 13 MP or 8 MP rear-facing camera with Time Catch Shot, 16GB or 32GB of storage space with microSD support for expanded storage, and a 2,100 mAh battery that isn’t massive, but definitely isn’t the smallest battery on the market.

The Optimus G will arrive with Android 4.0 Ice Cream Sandwich on board and LG says that it will be upgraded to Android 4.1 Jelly Bean at some point in the future. It has not offered any sort of a window as far as the Android 4.1 update is concerned.

LG’s new smartphone will join a crowded lineup vying for the hearts of consumers in the latter half of 2012. It will be going up against the iPhone 5, Samsung Galaxy Note 2, Motorola Droid RAZR HD, and HTC One X+ just to name a few.

In addition, it will likely be matched against the new Nexus smartphone which is rumored to be taking after the Optimus G. There are also rumors of a Galaxy Nexus 2 swirling which could mean that Google is planning on releasing multiple Nexus smartphones.

The new Nexus is rumored to be arriving within 30 days, possibly on October 29th at the All Things D Conference.