Last week LG announced it will hold an event in New York City on May 1, and today it confirmed the event will be the launch of the LG Optimus G Pro.

The invitation to LG’s May 1 event now includes an image of the LG Optimus G Pro, the manufacturer’s 5.5-inch smartphone. LG already announced the Optimus G Pro in Japan and South Korea, and the phone will finally launch in the U.S. next week with a release sometime later.

The invite to the event asks press to “share the genius of LG Optimus G Pro.” The event will include an exclusive concert from Atlas Genius, which is likely where the tagline for the event comes from. 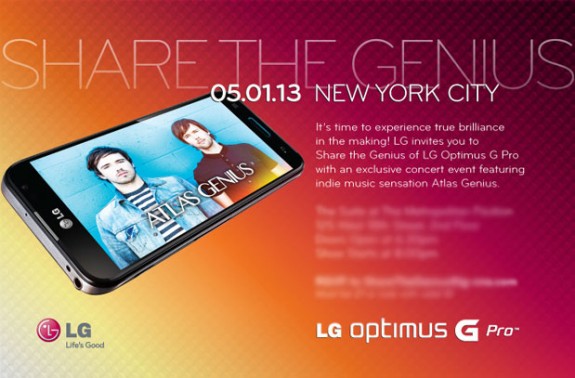 Assuming the U.S. version of the Optimus G Pro is the same as the Japanese and South Korean version, the phone will feature a 5.5-inch 1080p True HD IPS+ display and a quad-core Snapdragon 600 processor. The international versions of the phone have a 13MP rear-facing camera and a 2.1MP front-facing camera.

While the size of the Optimus G Pro puts it in the phablet category the phone lacks the stylus that’s usually associated with such large phones. So while the phone competes with the Galaxy Note 2 in terms of size it doesn’t have the same input options as Samsung’s phone. That may make the phone harder to use for some, but it’s hard to say without actually holding it.

The LG Optimus G Pro is the company’s latest phone, and the one which will compete against the Samsung Galaxy S4 and the HTC One when it comes to U.S. carriers. It has specs similar to both phones (they all use the Snapdragon 600 processor), but is the largest of the three.

The invite gives no indication as the which carriers will offer the Optimus G Pro in the U.S. AT&T and Sprint currently carry the LG Optimus G, so it seems logical that both would carry the phone’s larger sibling.