A new version of the LG Optimus G is coming with a larger screen and faster processor according a leak from Engadget.

Other features of the phone include a large 3000 mAH battery, 2GB of RAM and 32GB of internal storage. 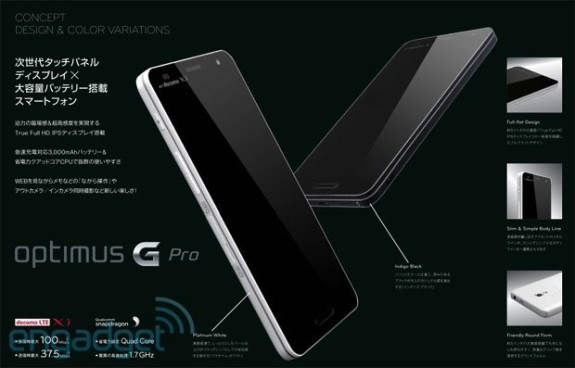 The leak shows the LG Optimus G Pro will come to NTT DoCoMo in Japan, which means it will also have One-Seg and NOTTV functionality for watching TV on the go.

From the leak the LG Optimus G Pro looks relatively similar to the current Optimus G, though the proportions also make it look like a large iPhone. There are no images of the screen turned on, but the phone will likely use some sort of skin on top of Android like the Optimus G.

Recent rumors said LG was working on a 1080p smartphone for AT&T, which could be the LG Optimus G Pro.

Other recent phones like the HTC DROID DNA debuted first in Japan with a U.S. release shortly thereafter.