LG’s highly anticipated flagship Optimus G2, which is due this fall with a powerful Qualcomm Snapdragon 800 processor, had been leaked previously in some blurry pictures, but now we have the most detailed look at the phone to date. A series of high resolution photos and a leaked hands-on videos show the Android smartphone running an LG user interface along with the new button placement to the rear of the device.

The Snapdragon 800 supports always-on voice recognition for instant access to voice searches, a feature that we’re hearing will come in some expanded form to LG devices. 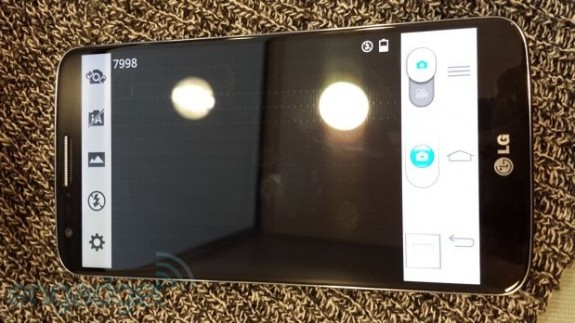 As expected with the “button-less” design, we’re seeing the volume buttons placed on the rear of the device towards the top center of the phone’s back side. The buttons are placed just below the camera pod, which houses the camera lens and LED flash unit. Sandwiched between the two volume buttons is a chrome or silver power button. In the prior blurry cam images, we had speculated that the button may have been for a biometric fingerprint scanner that integrates a power button functionality, but that doesn’t appear to be the case here. That button is just a power button, as we’re seeing now on the high resolution photos. 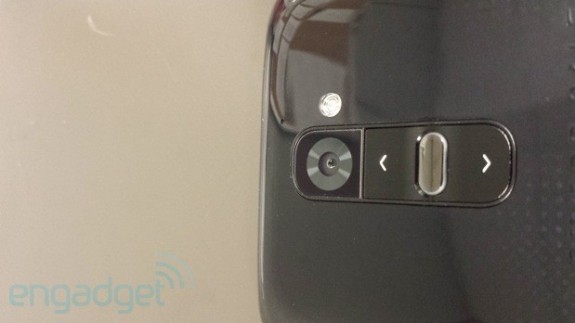 The images were posted on Engadget.

Additionally it appears that the front of the device takes the shape and design cues from LG’s current Optimus G flagship as well as the company’s Nexus 4, which is sold and marketed by Google. However, the rear of the phone appears to be a different story. The curved back, along with the bottom speaker placement, is somewhat reminiscent of Apple’s iPhone 3G and iPhone 3GS design, especially when coupled with the glossy piano black finish. 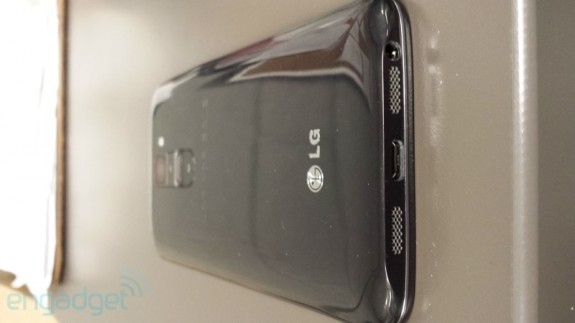 When we’re looking at the bottom of the phone, we’re seeing dual speaker grills, with each grill set flanking each side of the micro USB connector port for charging and synchronization. It’s unclear if this means that the phone itself will have stereo speakers at the bottom, or if LG is using one side as a loud speaker and the other side as the microphone port, similar to what Apple has done in years past. 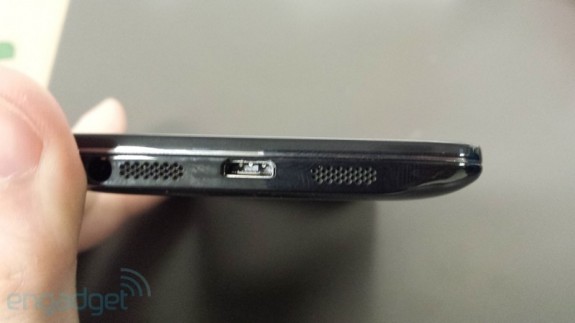 LG is expected to unveil the Optimus G2 at a media event in August, so we’ll have another month before we will find out the full specs for the device. Right now, it appears the phone may be among the first to hit the market with Qualcomm’s Snapdragon 800, outclassing current flagships like the HTC One and Samsung Galaxy S4, both of which use the Snapdragon 600 CPU.

From a teaser photo released, it may appear that the LG Optimus G2 will feature some sort of image stabilization for the camera module, which would aid in having more steady video captures.

The device is rumored to at least arrive on U.S. wireless carrier Sprint Nextel.