A new rumor suggests that LG will be replacing the LG Optimus G with the LG Optimus G2 in the first half of next year, a sequel that is said to have a 5-inch full HD 1080p display, Android 5.0 Key Lime Pie and a May release date.

The report comes from MK News from Korea and it suggests that LG has bumped up the launch of the LG Optimus G2, possibly to coincide with the arrival of the Samsung Galaxy S4, a device that Samsung is said to be releasing in the middle of Q2 2013.

Specifically, it appears that the LG Optimus G2, which would replace the recently released LG Optimus G, will arrive in May of next year or six months from right now. If true, that could mean that LG will announce the device at Mobile World Congress in February, the same event that is rumored to be the launch event for the Samsung Galaxy S4. 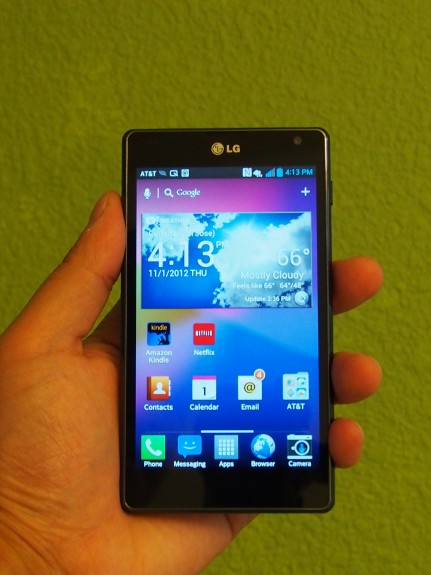 The Optimus G may be replaced in May.

It also looks like LG will be taking on the Galaxy S4 in the hardware department as well as LG is rumored to be bumping up the screen size and the resolution of the display in the Optimus G.

If this rumor pans out, the LG Optimus G2 will rock a 5-inch display with a full HD 1080p display, the same resolution and virtually the same size display that the Galaxy S4 is rumored to have. The Galaxy S4 is said to have a 4.99-inch full HD 1080p AMOLED display, one that Samsung may show off at CES. The Optimus G2 display is said to have 440 pixels-per-inch which will make for clear reading and beautiful images.

It also looks like the Optimus G2 will sport a 4G LTE radio, 2GHz quad-core processor, and Android 5.0 Key Lime Pie. The Android 5.0 Key Lime Pie rumor seems to be flimsy at best as Google generally announces new major software updates at Google I/O. Google I/O generally takes place during the middle of the year though Google may bump it up. At this point though, the Optimus G2 will more than likely have Android 4.2 on board.

Look for more details to emerge over the next couple of months in the build up to MWC 2013 which kicks off in late February.