The LG Optimus Vu 2, a device that launched at the same time as the Samsung Galaxy Note 2 as a competitor to Samsung’s phablet, is finally getting its upgrade to Android 4.1 Jelly Bean, an operating system that the Galaxy Note 2 has been running from the very beginning.

In late 2012, both LG and Samsung announced their two new competing phablets. Samsung announced the Samsung Galaxy Note 2, a device that has gone on to garner acclaim across the world while LG announced a sequel to the LG Optimus Vu phablet dubbed the Optimus Vu 2. The launch came at a strange time given that the original Optimus Vu hadn’t even launched yet in the United States. 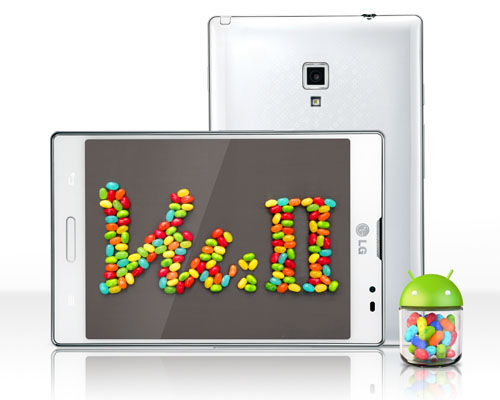 Even odder, the Optimus Vu 2 arrived without Android 4.1 Jelly Bean, an update that had been out since July. Instead, the device was equipped with an older version of Android, Android 4.0 Ice Cream Sandwich. That is, until just recently when LG announced that the LG Optimus Vu Jelly Bean update has finally arrived in Korea.

LG has started to roll out the Android 4.1 Jelly Bean update for two versions of the LG Optimus Vu, including the variants from KT and SK Telecom. In addition to those, LG confirms that the update will arrive for the variant sold by LG U+ in March though it doesn’t provide a specific date for the roll out.

Jelly Bean is obviously a huge upgrade for owners that are in possession of LG’s Optimus Vu phablet and it will bring a new and improved UI, Google Now, more Face Unlock features, and a whole lot more.

The LG Optimus Vu 2 has not arrived in the United States. Verizon did opt to carry the original LG Optimus Vu, dubbing it LG Intuition, a device it launched before the Samsung Galaxy Note 2, the latter of which arrived at the end of November.

Like the LG Intuition, the LG Optimus Vu 2 sports a 5-inch display.