The LG Spectrum 2, Verizon’s follow-up to the original LG Spectrum which launched earlier this year, has leaked to the surface today.

TechnoBuffalo has brought not only a render of the Verizon-branded device to the surface, but its presumed specs as well and it appears that LG is going to be following a pretty similar pattern as far as the specifications are concerned.

The LG Spectrum 2 is going to feature a massive True IPS HD display that measures in at 4.7-inches. Most high-end Android smartphones that have launched this year have included a large display.

Additionally, the LG Spectrum 2 will apparently have a dual-core Snapdragon S4 processor clocked at 1.5GHz, a processor that has been found on several high-end Android smartphones including the HTC One X and HTC One S. 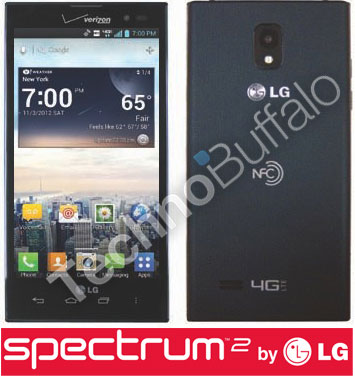 The LG Spectrum will have a massive display and a fast processor.

While it might be listed with Android 4.0.4 Ice Cream Sandwich right now, it’s possible that the device will arrive with Android 4.1 Jelly Bean, Google’s latest Android operating system.

The device, which is the LG VS930, was originally known as Verizon’s version of the Optimus LTE II.

It will replace the original LG Spectrum which launched in January of this year and is going to be getting the upgrade to Android 4.0 Ice Cream Sandwich in the coming days.

There is no known release date for the LG Spectrum 2 though previously, it was rumored to be out in early July. So, it’s possible that we might see an announcement come soon.