We had a feeling that the LG Spectrum would get announced at CES 2012 and sure enough, LG and Verizon wasted no time in introducing the successor to the manufacturer’s original 4G LTE smartphone, the LG Revolution. Luckily, Verizon filled us in on all of the details, pricing and release date included, so let’s take a look at the carrier’s latest LTE phone from LG.

First and foremost, we should point out that it’s going to be coming with a large 4.5-inch display, a display that will feature True HD IPS and boast a resolution of 1280×720. LG claims that it will also feature direct viewing in sunlight and true-to-life color rendering. 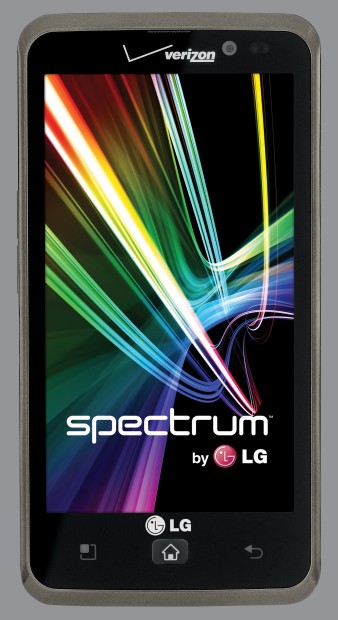 The display will also have Gorilla Glass on board, perfect for those of you with a penchant for smashing your phone’s screen.

Some other highlights of the LG Spectrum include:

It will also feature an exclusive version of ESPN’s ScoreCenter application as well as Dolby Digital Plus for those that wish to stream audio from their phone, throughout their house.

And while it’s coming with Android Gingerbread out of the box, LG says that it will be upgraded with Android 4.0 Ice Cream Sandwich in the first half of 2012.

Verizon will launch the phone on January 19th, same day as the BlackBerry Curve 9370, and it will retail for $199.00 on a new two-year contract, lower than the usual $299.99 price the carrier usually asks for its 4G LTE smartphones.