Both the LG Spectrum and the LG Lucid are now amidst Android 4.0 Ice Cream Sandwich roll outs from Verizon.

We imagine that the roll out is similar to that of the Droid Bionic’s which started on Friday but has yet to roll out to a majority of owners. If that’s the case, it may be a few days before LG Spectrum owners see the Android 4.0 update arrive. 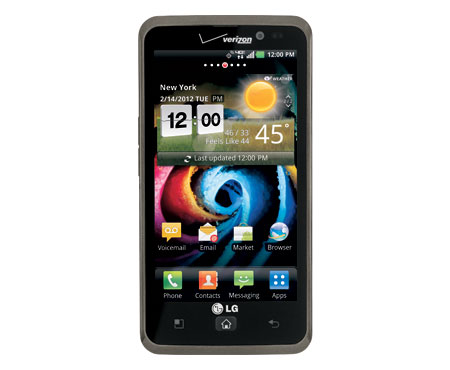 The LG Spectrum ICS update is rolling out now.

That aside, this is welcomed news for LG Spectrum owners who have desperately been waiting for an upgrade from Android 2.3 Gingerbread to Android 4.0 Ice Cream Sandwich for many months now.

The device, which has been out since the beginning of the year, finally will have access to all of the features that Android 4.0 Ice Cream Sandwich provides including Face Unlock, the new lock screen, a brand new user interface, and an improved browser. All in all, it’s a better experience than that of Gingerbread and one that Droid Bionic owners are saying has turned their phone into a brand new device.

In addition, the update will bring:

+ Firmware Over The Air (FOTA) is now supported.
+ Watch & Learn videos are supported via streaming.
+ Improved voice clarity during voice calls.
+ Power button turns on LCD backlight while on a voice call.

The following apps have been upgraded for improved performance:

It should also bring bug fixes as well.

The LG Lucid update, which has been rolling out since Friday, will likely take a few more days to reach every single owner so those who own the device should remain patient. As for the LG Spectrum, should the update be available, there should be a prompt indicating that it is.

Those that don’t wish to wait can attempt to download the update through the Software Upgrade Assistant Tool.