While  AT&T never actually announced an official release date for the LG Thrill 4G, we were pretty certain that it would be coming on August 7th. Documentation pointed to that date as launch day and Radio Shack even began taking pre-orders for the phone that is known as the LG Optimus 3D elsewhere in the world. Turns out, that supposed August 7th release date at Radio Shack may have been pushed back all the way to August 21st for unspecified reasons. Now, that doesn’t necessarily mean that AT&T won’t be launching it before that but did say just a few days ago that it would be coming in the next few weeks and August 21st is certainly within those parameters. 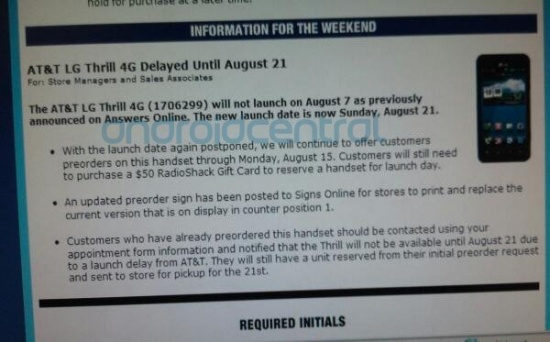 Radio Shack will apparently continue taking pre-orders for the Thrill 4G, which it has been doing since July 22nd, until August 15th and those that have already pre-ordered will be notified of the delay at some point in the near future.

We’ve reached out in an attempt to confirm whether or not this delay is the real deal but from the looks of things, AT&T’s first 3D-enabled smartphone won’t be hitting shelves until the 21st of next month.