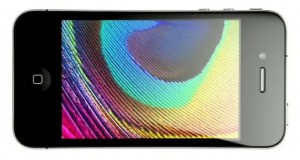 LG Display, which has been a strong partner to Apple in launching the Retina Display on the iPhone 4 as well as procuring iPad display panels, will be making its display technology available to other manufacturers soon. This could potentially lead to Retina Display-powered Android smartphones in the near future, with 960 X 640 resolution screens panned over a 4- or 4.3-inch display size. LG’s president says that the LG’s Retina Display in the iPhone and iPad will be coming to more manufacturers.

While Android smartphone manufacturers, such as Motorola and HTC, have made due with a qHD display of comparable pixel resolution, the PenTile-based qHD screens have not produced as sharp of image quality as Apple’s Retina Display, made by LG.

The difference between Retina Display and the qHD screen is not that much–about 100 pixels on the horizontal dimension. qHD displays have 960 X 540 pixels, versus the 960 X 540 of the Retina Display. The difference can be attributed to qHD’s utilization of a 16:9 aspect ratio format to accommodate a better widescreen video experience.

However, the underlying arrangement of pixels may be the cause to qHD’s slight grainy appearance. Utilization of the PenTile display means that text and images may appear a bit more pixelated, and this is a phenomenon that’s been apparent in PenTile-based AMOLED and Super AMOLED panels from Samsung. As a result of the pixelation, Samsung had moved to a more standard pixel and sub-pixel arrangement in the latest generation of Super AMOLED Plus displays and away from the PenTile arrangement.

Hopefully, with Retina Display technology utilizing a more standard pixel arrangement, qHD resolution-based screens made by LG with the 16:9 aspect ratio for Android smartphones of the future will be sharper and crisper.

However, even with Retina Display, Android smartphones that standardize on larger 4-, 4.3- or even 4.5-inch displays will appear less sharp than today’s iPhone 4. The reason is that instead of distributing the pixels over the iPhone’s smaller 3.5-inch display, those same number of pixels must now cover a larger display area of 4 inches or greater. So the same number of pixels will not appear as sharp as a result.

More pixels will lead to sharper text and images, and even the potentially to view more content on the screen if the content is squeezed down small enough. When Apple unveiled the iPhone 4 with its Retina Display, the Cupertino, California company highlighted the New York Times homepage as an example. Showing the full homepage on the iPhone’s display, Apple says you can make out even the smallest of text, though users would want to zoom in to read the text without straining their eyes. The point remains though that even small fonts can become legible when zoomed out whereas on rival phones with WVGA, HVGA, or QVGA-based resolutions, those small text appear as illegible squiggles.

The comment from LG implies that LG’s ‘Retina Display,’ or a high resolution display is used on an iPad, which can imply that rumors of a Retina Display iPad 3 is feasible or in the works. The LG CEO also downplayed speculations that Apple is exploring OLED-based technology for its mobile products. While LG is expected to deliver a 55-inch OLED TV this year, the CEO says that the technologies used for OLED displays “are not suitable in terms of picture quality, response time, energy consumption and contrast ratios for smartphones and tablets,” taking an aim at rival Samsung with its Super AMOLED Plus solutions.