Monoprice is now selling Lightning USB cables for $11.77, a 38% savings compared to Apple’s $19 cable. The online retailer is well known for selling generic cables and accessories for a fraction of what Apple, Monster and others’ goods sell for.  The availability of cheaper Lightning cables should ease many iPhone 5 users’ frustrations over Apple’s decision to ditch the ubiquitous 30-pin adapter, which was featured on almost every iPod, iPhone and iPad since 2003.

All of Apple’s latest iOS devices, including the iPad mini and iPod touch, have Lightning ports and come with a single USB to Lightning cable for synching and charging. While the Lightning connector is more compact and can be plugged into iOS device with either side of the connector facing up, it has created some headaches. The switch has rendered many docks, chargers and other accessories obsolete, forcing some users to stock up on Apple’s Lightning Cables, Lightning Adapters to 30-pin Adapter dongles ($19), and Lightning to 30-pin Adapter Cables ($39). 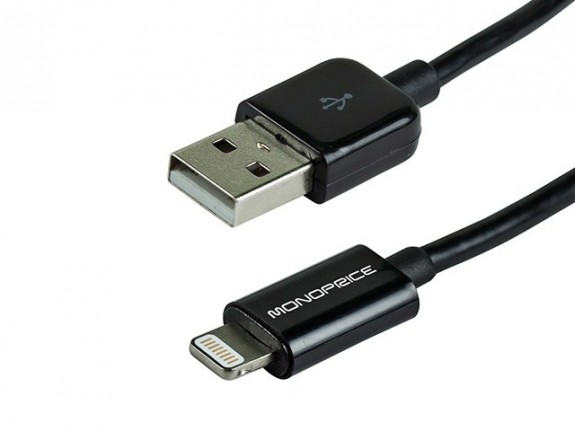 The Monoprice Lightning cables measure 3 ft. long and are black, rather than Apple’s signature white. There is a small Monoprice logo printed in white on the LIghtning connector. While this sort of styling won’t be acceptable to some Apple purists, the savings are well worth a color change for those who need multiple Lightning cables.

Monoprice is also selling an extended LIghtning to USB cable that measures 6 ft. long for $12.56. This cable could be useful for those who need to use their phones while they’re charging in a wall outlet at ground level.

Apple’s been heavily criticized for baking yet another proprietary connector into its iOS devices. Almost every other smartphone and talbet manufacturer utilizes micro USB connectors. The European Union mandates smartphones use micro USB for environmental reasons. Apple satisfies this requirement by offering European customers micro USB to LIghtning adapters.

Monoprice is perhaps best known for selling HDMI cables for home theater systems for less than $2. Many big box retailers push HDMI cables that cost up to $150 each.