Lightning Headphones Coming to an iPhone Near You

Apple wants your iPhone to be the way that you listen to music and a new way of connecting your headphones to the iPhone or iPad using a Lightning cable may be the answer.

Originally rumored as a method to deliver high-end audio to the iPhone with an iOS 8 feature, Apple recently shared some details about the new Lightning headphones in the days following the iOS 8 announcement.

Although this does not appear limited to a new iPhone, if Apple is working on Lightning headphones we could see a debut with the iPhone 6 this fall. The previous rumor, which was debunked, suggested Apple would build in sensors to track health information. Although this new information from Apple does not contain any information about health tracking it is a sign that you may soon enjoy better sound from your iPhone and iPad.

This new spec for manufacturers also comes as Apple confirms the purchase of Beats Electronics, a company that makes a wide range of fashionable headphones. Although the purchase is not expected to complete until Q4, it is possible that we will see Beats Headphones with a Lightning cable as on of the first options. 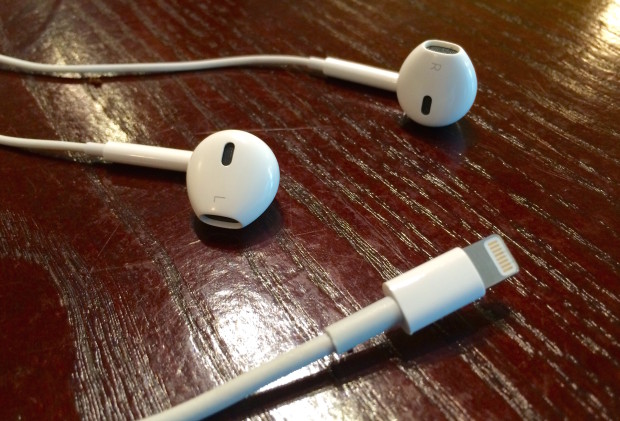 9to5Mac discovered the new spec in Apple’s Made for iPhone (MFI) program, which outlines the new method of connecting your headphones to the iPhone for better sounding audio. The feature will reportedly come to devices on iOS 7.1 and higher through a future update.

The spec will allow other companies to make Lightning headphones for the iPhone and iPad that are capable of sending lossless stereo 48 kHz digital audio and will include a microphone that can handle mono 48 kHz digital audio. Ultimately this means you will hear better sounding audio when using the iPhone or iPad as your music player.

This new feature will allow the headphones to launch a specific app when plugged in, but it is not clear if that is an app tied to the headphones like Beats Music for Beats Headphones, or if the user can configure it.

Other features include the ability to draw and supply power to the iPhone. When connected by Lightning the iPhone could power noise canceling headphones or a pair of headphones could contain a battery to charge up the iPhone. There is some sort of pass through cable or technology that allows users to charge while listening to music.

On top of sending higher quality audio to your ears manufacturers could build in support for noise cancellation and other features that music lovers may want in a pair of advanced headphones.

It’s possible that this type of new headphone connection would help Apple deliver a thinner iPhone 6 or thinner new iPhone in the future. Current mockups show a 3.5mm headphone jack, but Apple removed the old dock connector to go thinner. Apple may not be in a position to push this thin and cut a 3.5mm jack on the iPhone 6, but with a iPhone 6s or iPhone 7 perhaps.

Another lingering question is how these type of headphones will connect to a MacBook. Apple may need to add a Lighting port or some type of connectivity to allow Lightning headphones to work with a computer.

iOS 8 arrives this fall and will likely include support for Lightning Headphones. iOS 7.1.2 is expected sometime this year to fix an iMessage issue and may be the update that adds this to iOS 7 devices with a lightning port. We expect to see an iPhone 6 release in September.