The Like Parent App shot to the top of the charts over the weekend as parents and children uploaded photos to see who the child looks like more.

The free Like Parent app allows users to upload three photos and then see who the child resembles more. It takes just a few seconds to use and it is fun, but it is not actually doing any real work in analyzing your photos.

Here’s a fast look at what you need to know about the Like Parent app that helps you, “Check who is the most look alike you! Mom or Dad?”

Like Parent is an app that shows the percent that a child looks like two parents. The app allows a user to take three photos or upload them from the photo gallery and then compare the photos.

After comparing the photos, a user can save the comparison and or share it online. When saved a square photo appears in the gallery so that users can share it on Instagram and other social networks.

It is possible to use the comparison feature multiple times and with multiple photos. This allows you to check multiple kids, and as you’ll find even pets.

You can download Like Parent from iTunes to the iPhone and there is a Like Parent Android app on Google Play, but it is not clear if it is from the same developer.

Hot on the heels of the How Old Robot that scans your face to try to figure out how old you are, the Like Parent app sounds like an awesome idea and one that is plausible. With face scanning tools, users can expect some type of tool to tell them which parent a child looks most like. 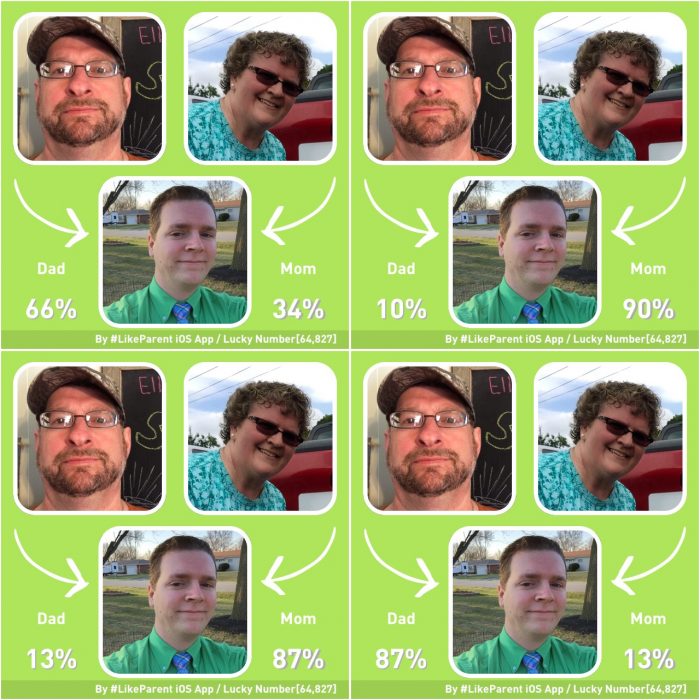 No real face scanning in the Like Parent app.

Unfortunately the Like Parent app just shows a random percentage on each side. The app description states, “Try this app. It can analyse your face and show who look like you the most.”

When you click to see more, the real information is revealed as the disclaimer states, “This app is intended for entertainment purposes only and does not provide true facial scanning functionality.”

The Like Parent reviews are not flattering on iTunes. Many users are frustrated by the lack of actual face scanning and that the “advanced algorithm” just shows a random percentage even with the same photos. 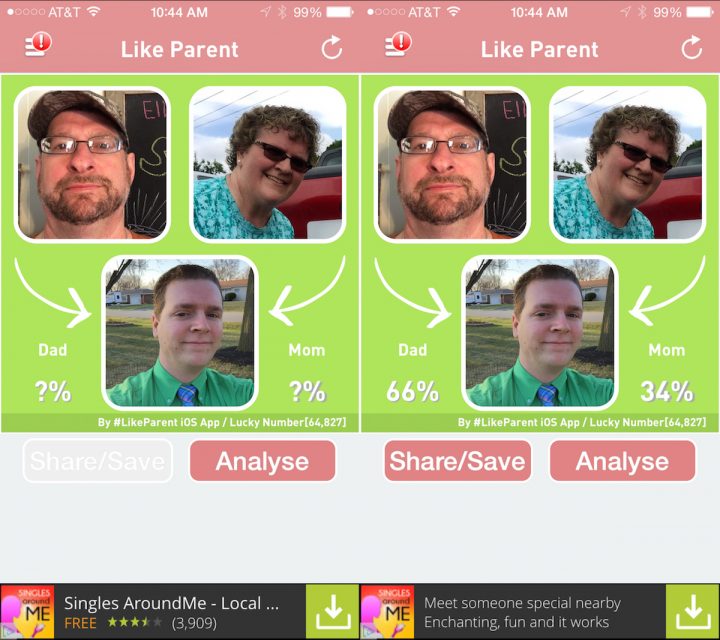 The Like Parent app is popular, even with a low rating.

The Like Parent rating is down to one and a half stars even with a trending search and a spot in the top 10 free apps for iPhone. Tee tying Oo writes a Like Parent review complaining,

“While I understand this app is solely for entertainment purposes and there is no scientific element applied, I should, at minimal, get consistent “entertainment” results for the same pics. This app is making a profit with displaying ads but clearly there was very little effort put into the software. The developer(s) should have attempted to make at least a simple algorithm that would provide the same (or at least close) percentage when I decide to analyze the same pics numerous times. I received completely different results each time I analyzed the same pics, which takes away all the “fun” of the app”

Other reviews offer similar criticism, but some users find even the random nature of the app entertaining.

Beware that there are a lot of ads inside the app, and if you use it multiple times you will need to sit through a variety of ads for other apps and services. That’s how free apps make money, but it can also overwhelm users when there are too many ads.

When opening the Like Parent app for the first time it may ask to push you notifications. An app like this does not need to push a notification to work, so we did not grant it this permission. Many times apps that don’t need notifications will ask for permission to send an alert to come back and try the app after you’ve since moved on to something else.

When users share the results from the Like Parent app to Twitter it includes the #LikeParent hashtag that makes it easy to see funny and humorous results. Here are a few of the most entertaining Like Parent results from pet parents that we could find.