Yet another perk for Apple’s using a closed ecosystem is that every purchase users make is a little commitment to their platform. With each iOS user having invested an average of $100 in apps, according to AppleInsider, it’s looking like Apple’s “customer loyalty” is in no danger of falling any time soon. But this “loyalty” isn’t a fluke or a recent occurrence – it’s been the company’s master plan that started ten years ago. 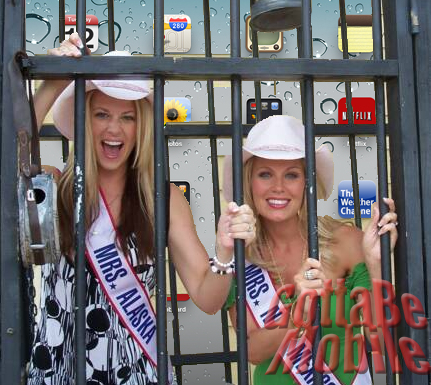 iOS users are more locked in, but they don't seem to mind.

Analyst Chris Whitmore of Deutsche Bank said (in a note to investors on Monday) that iOS buyers have invested about $22 billion in content on their iDevices. This includes both AppStore and iTunes purchases. Due to this investment (as well as an expected rise in iOS adoption), he says “the resulting customer loyalty is unparalleled.” Perhaps loyalty isn’t the best choice of words when you’re essentially saying “they’ve put a lot of money into this so they aren’t leaving any time soon,” but you get his point.

Really it’s been a brilliant decade for Apple. It all started with the iPod. They made the first MP3 player that non-techies wanted. Its mass adoption was a worldwide phenomenon. But Steve Jobs always knew that the iPod wasn’t an end in itself – it was merely the first stepping stone in a process of mobile computing domination.

They used their own DRM-laden audio (and later video) format, and they made iTunes music much easier to put on iPods than music purchased from elsewhere. By doing this, a) they reduced the likelihood that any other MP3 players would pose a threat in the short-term (RIP Zune), and b) they grew their base of customers who had invested in Apple digital purchases.

Then came the iPhone. When it launched, the AppStore didn’t exist. The number one reason early adopters jumped on board was that it was an iPod… and a phone. It was one less device to carry around (and it just happened to be a very sexy device). All of the music and videos users had purchased for their iPod were immediately usable on the iPhone.

Then, two and a half years later, after apps took over the iPhone, they added the iPad – where, again, all of their previous music, video, and app purchases could all be downloaded and installed without a hitch. Any user’s history of digital purchases (that could date back as far as 2001) had yet another hot new device to be installed on.

The next iteration of this process isn’t a new device, but a method of content delivery. They’re eliminating the need for iTunes and replacing it with iCloud. All iOS devices will soon automatically sync users’ purchases without their having to do anything.

iCloud is handy from an iOS user’s standpoint, but it’s genius from a business perspective. Now all of that content that customers have been investing in the platform is going to “magically” sync onto every Apple device they own.

If you have an iPad, but you also have an Android phone and a PC, then you have to manually sync photos and documents. But if you have an iPhone, an iPad, and a Mac – then you get to see the magic. Everything is there waiting for you – all the time. They’ve added an extra incentive to hook users into their products.

Additionally, any music that iCloud users have (whether it came from Amazon MP3, their CD collection, or Pirate Bay) will soon be incorporated into their iCloud account via iTunes Match (an optional $25/yr. purchase). A user’s music collection will be scanned, and the song and album titles will instantly be available for background syncing on all of their iDevices – forever.

With this one move, Apple is picking up anyone’s music collection that they missed back in the days of the iPod. Entire collections will be forever associated with Apple and their iDevices. It’s genius, frightening, and awe-inspiring all at the same time.

However, it’s not that we hear too many people complaining. Most of Apple’s customers chose iOS for a reason, and they’re nothing but happy with that decision.

iOS has the most mature app market. Despite Android’s gains in quantity (on last check they hadn’t quite caught the AppStore in number of apps), the quality of app development (particularly in games and tablet apps) is still clearly in iOS’ favor. Software development can make or break a platform, and Apple is the undisputed leader in that department.

Combine that with their attractive hardware design, the simplicity of the iOS firmware, and sheer popularity – and few are likely feeling the least bit bad about how “trapped” they are in iOS. It’s Apple’s world, and their customers are more than happy to be imprisoned in it.