An outfit here in Virginia called Velocity Micro has announced a series of Android-based tablets under the collective name of Cruz. The line includes the Cruz Reader with a 3:4 ratio display intended primarily for reading eBooks; the Cruz Tablet is a widescreen 16:9 model with capacitive multi-touch display and more horsepower; and the Cruz StoryPad, similar to the Reader but with a kid-friendly design and color options. 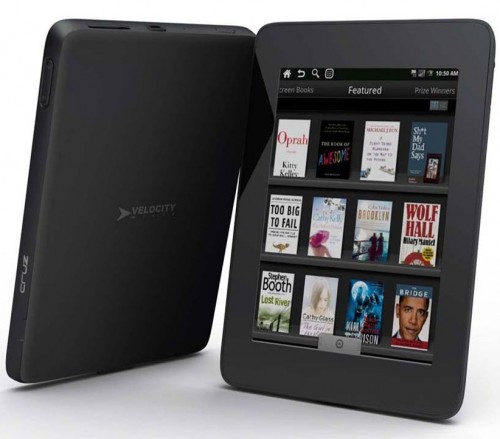 “Since 1992, Velocity Micro has been dedicated to building remarkable consumer electronics,” said Randy Copeland, President and CEO of Velocity Micro. “With the development of the Cruz line, we were able to take those enthusiast sensibilities and package them for the mainstream consumer to create a product that’s not only amazing, but affordable as well.”

At under one pound and about a half inch thick, the $199, 7″ Cruz Reader goes everywhere you do, making it perfect for students, avid readers, frequent flyers, and techies. Additional features such as video playback and web browsing provide a much richer experience than traditional e-ink readers at a more reasonable price than a tablet.
Key specs and features include:
· Crystal clear 4:3 ratio, 800×600 full color touch screen display – ideal for viewing ebooks and magazines, plus web pages and movies
· Google Android Operating System
· 802.11b/g wifi and full Web browser support
· High res video and high quality audio playback with no proprietary content restrictions
· Built-in Dictionary, Notepad, Calendar, Alarm Clock, Contacts, Games, and other useful apps
· Built in accelerometer, tilt activated
· Enough built in storage for hundreds of books
· USB and SD card slot for upgradable storage, including a 2GB SD card
· Up to 10 hours of use and over 24 hours of standby time, with a replaceable battery
· Access to over 2 Million ebooks via included Borders E-book library portal application
· Access to the Cruz Market™, an open content portal for downloading apps, magazines, and videos from a broad array of content providers. 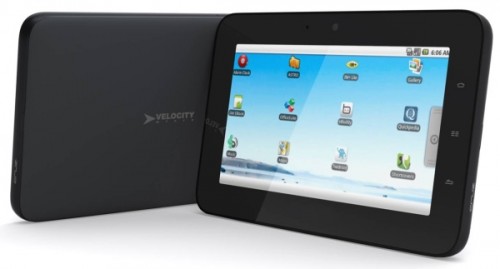 The Cruz Reader and Cruz StoryPad will be available from most major retailers and direct from Velocity Micro in August with the Cruz Tablet following on September 1st. For more information or to sign up for e-newsletter updates, visit www.CruzReader.com.

While not as dazzling as the iPad, the Cruz tablets have a considerable price advantage, and they’re aiming to carve out a good niche for themselves with the kid-friendly StoryPad. It’s good that they’ve partnered with Borders for book content, but having to use their own store for apps and other content is a hindrance. Vendors being forced to handle their own app stores for non-phone devices is a weak point of using Android. I think Google needs to put together some sort of sub-store system to let vendors pick and choose apps from the full Android Market that will work on their specialty devices.

Via Gizmodo and Engadget