Though Asus had flashed the new, second-generation Eee Pad Transformer, called the Transformer Prime, earlier this month in Asia on stage at AsiaD, we are now finally seeing photos of the tablet’s laptop dock up close. The Laptop Dock borrows its visual cues from the company’s new Zenbook ultrabook notebook, with an aluminum colored shell and black keys, which has the same look as Apple’s MacBook Air. The new dock features island-style keys arrangement and a large trackpad. 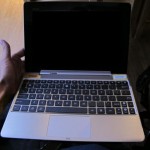 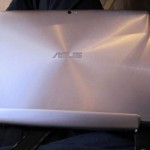 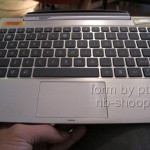 The laptop dock was a unique and attractive accessory for the original Transformer, which brought about a novel idea of utilizing the Honeycomb tablet’s display to convert the dock accessory into a laptop form factor. The dock itself comes with a keyboard and a trackpad to control the tablet, alongside some ports for memory card and more USB ports. Additionally, when docked, the tablet also gets charged and battery life is extended.

At this point, the leaked images have since been pulled from the original source. It’s still unclear if the Laptop dock for the Transformer Prime will be constructed from aluminum or if it is plastic made to look like metal.