The OS X Yosemite release will make the Mac, iPhone and iPad smarter and better connected with the ability to send text messages from the Mac and to take and make calls from the Mac.

Once you install OS X Yosemite on your Mac it will detect that your iPhone is nearby and you will be able to seamlessly connect to it to relay messages and phone calls from your iPhone to the Mac. This works anytime the devices are near, without turning things on or pairing them.

This works even if the iPhone is across the room in a bag, or in another room charging. Apple didn’t dive into the details, but it very likely works using Bluetooth to communicate between the devices. 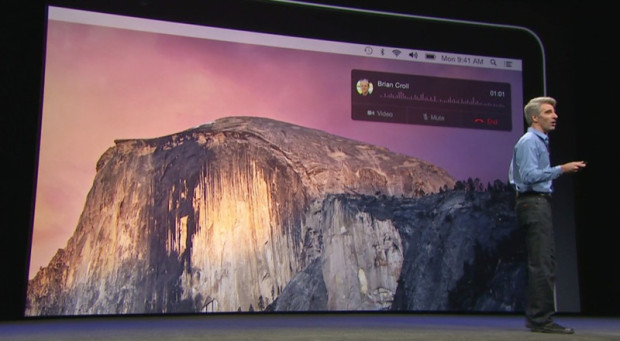 Take a phone call on your Mac using the iPhone.

When the OS X Yosemite release date arrives this fall as a free update, your iPhone and Mac will talk together in ways that you only imagined before.

This is an extension of the FaceTime Audio and iMessage service that Apple offered to iPhone and iPad users, making it possible to communicate with Android, Windows Phone and even flip phone users right from your Mac.

It will very likely require the iOS 8 update that is coming this fall to make this work. Even though there is an official OS X Yosemite beta this summer, this feature may not go live at that time. 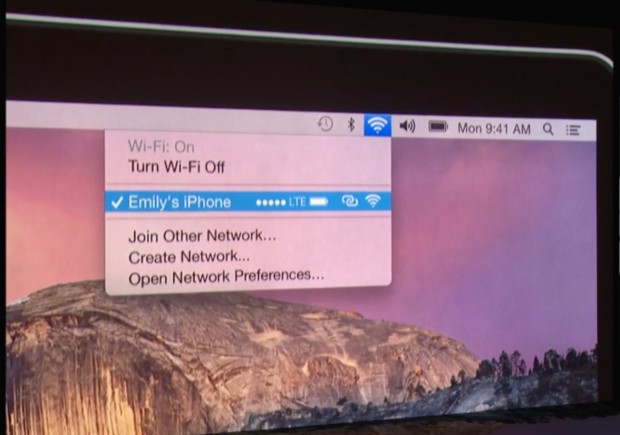 The Instant Hotspot is part of this new connectivity.

When you get a phone call the Mac will show you notification in the upper right with who is calling and an option to answer or decline the call. Apple demoed this on stage with a phone call from Mom, which the presenter decline and sent his mom to voicemail on his phone.

You can also dial out from the Mac, over your iPhone. This works form a website by clicking on a phone number. You can also click on a number in contacts. Apple showed this off with a call to Dr. Dre on stage. Apple just purchased Beats By Dre, which is why they called Dr. Dre.

When you do this the Mac is essentially a speakerphone for your iPhone. The call is still on the iPhone and it is going to use minutes. 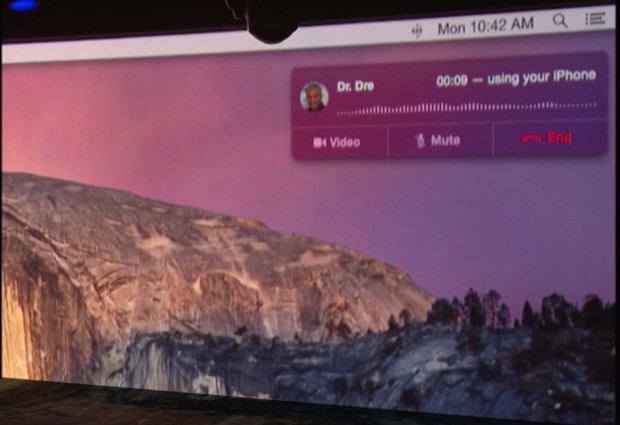 Make a call from your Mac, using the iPhone.

The Messages app on Mac can now show your text messages that come from friends and family using an Android, Windows Phone or just a plain flip phone. This is a big upgrade from OS X Mavericks which only offered iMessages on the Mac. This operates by the same process as phone calls, so it will relay the messages wirelessly from the iPhone to Mac.

Once the messages are on your Mac you can quickly reply with the Messages app on a Mac running Yosemite. With iOS 8, the iPhone can also use the relay feature to send calls to an iPad and text messages will show up on the iPad as well. Apple is working on an experience that works across devices and can even use the iPhone as an Instant Hotspot without setting it up.