Smart watches are the new hot trend for wristwear, but not all smart watches are created equal. While Pebble and MetaWatch gained big attention on Kickstarter, they lack the ability to use voice commands.

Enter Martian Watches. The Martian watches connect to the iPhone and Android smartphones with Bluetooth to provide access to Siri and Google Voice Actions over the integrated Bluetooth Speaker and microphone.

The watch vibrates for notifications like the rest of the smart watch crowd, but when it comes to interaction Martian Watches appear to be at the top of the pile for users who want to use Siri while the iPhone is tucked in a pocket.

Check out the Martian Watch in action. The audio in the video is from the watch, not dubbed in after.

I’m a fan of watches that do more than tell the time, and after checking out the video it’s tempting to back  Martian Watches on KickStarter. I’ve been looking for a good way to use Siri while in the car, and this appears to be one of the easiest ways to check texts and reply while on the road.

The watch offers the following features for the iPhone and Android phones. 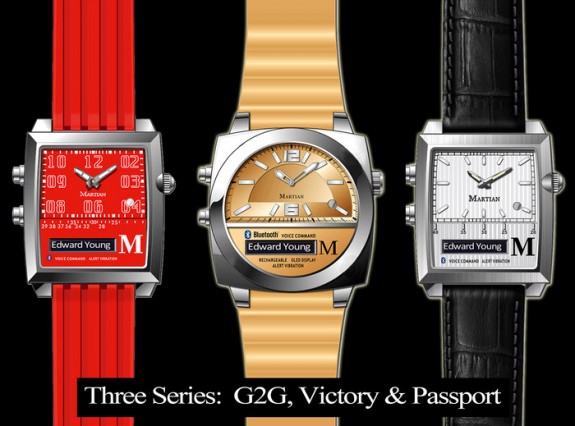 Android phones are able to receive text notifications and additional features with the companion app to the LED and the Caller ID display.

The Martian Watches come in three varieties with different looks and prices. Early Kickstarter backers can net a watch for as low as $95.

If watches like this catch on they could play a role in moving us towards connected tablets that replace smartphones. Perhaps the biggest factor limiting this is a good way to take and make calls, and a connected wristwatch paired great voice control personal assistants could overcome this hurdle for users.