Marvel Comics rolled out a three-pronged digital strategy over the weekend intended to use digital power to save print comics. Will it work?

The strategy, dubbed Marvel ReEvolution, was announced over the weekend and debuted at SXSW. It follows the recent digital reboot by DC Comics but goes even further with interactive and interconnected content. Rather than make comics a one or the other proposition between print and digital, Marvel’s ReEvolution seeks to combine the two in a way that supplements traditional print with interactive digital content. 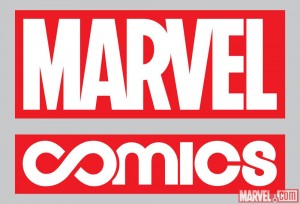 The “Incredible Hulk” of the ReEvolution is Infinite Comics, a digital-born format that allows storytellers to take liberties with the medium that print would not allow.

The exact limits of these changes are undefined, but ComicsAlliance cites examples such as “dynamic panel transitions and captions or dialogue boxes that appear sequentially on an image at the prompting of the reader.” I suspect the open nature is part of the appeal, allowing creators to experiment and develop their own styles of what can (or shouldn’t) be done with an infinite digital canvas.

The ReEvolution kicks off with a digital expansion of Avengers Vs. X-Men #1m called Avengers Vs. X-Men #1 Infinite. Written by Mark Waid with art by Stuart Immonen and Marte Gracia, this story features the Man called Nova, the Human Rocket (ironically also called “Kid Nova” at a time when he was a grown-ass man). The “Infinite” tale goes on sale in June direct from the Marvel Comics app (iOS and Android), either as part of the AvX #1 digital edition or on its own for 99 cents. It can also be purchased as part of the print+digital edition 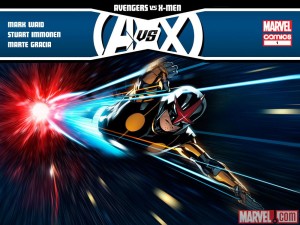 Beginning in June, Marvel’s top tier print comics will ship with codes redeemable for digital copies. These titles, which include Avengers, Amazing Spider-Man, and Wolverine & The X-Men, will be priced at $3.99, not as “free” as Marvel’s press would like us to believe.

This follows previous print+digital releases with their graphic novels and Ultimate Comics line. Although not stated, it is assumed this will follow that same style of shipping the books in polybags to prevent the unique redemption codes from being lifted. (Hat tip to Comic Booked and Gizmodo.)

These titles will also be available for sale as digital-only but at the same price. This means you’ll get more bang for your buck by buying print. On top of that, Marvel is sweetening the pot for print with augmented reality. 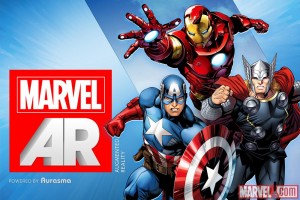 Coming in April to Android and iOS, Marvel AR will give readers access to exclusive content by scanning books featuring the Marvel AR logo. As with Infinite Comics, the exact nature of this content is vague, allowing creators freedom to do their own thing, but it is described as similar to DVD behind-the-scenes extras with content and commentary from the folks who made the book.

One thing I hope Marvel AR will do is provide summaries of or links to backstories so old guys like me aren’t constantly having to look up things like “When the hell did Colossus become the Juggernaut?” or “Is that #$%@ing Bucky? How hard was that Superboy-Prime time punch that it #$%ed up Marvel’s reality?”

The system is powered by Aurasma, a San-Francisco based company specializing in augmented reality and creator of “The World’s First Visual Browser”. “Lite” versions of their smartphone apps are available for public use, while developers can access their “Pro” versions.

Forbes managed to chat with Axel Alonso, editor-in-chief of Marvel Comics, at SXSW about Marvel ReEvolution, Infinite Comics and Marvel AR. Video below. Hat tip to my friends at Netbooknews.com.

Overall, while ReEvolution is kind of a weak name, the strategy seems cohesive and highly centered around supporting print books, not subverting them. But let’s not kid ourselves. While print may not be going extinct, it is steadily becoming the premium version of content as digital becomes increasingly mainstream. As I’ve been seeing with science and medical journals, I believe only a few top-selling comics will survive in print, such as Marvel’s premium titles getting the print+digital treatment, while lower-sellers will eventually go all-digital (or become rare, limited-edition collectibles). Marvel’s not saying that will be the case, but they definitely seem ready for that inevitability.