The latest mobile Mass Effect game is finally available on Android, two months after the mobile game came to iOS, and Mass Effect 3 came to consoles.

Mass Effect Infiltrator is now available on the Google Play Store, giving Android users the chance to fight against the Cerberus organization anywhere they want. The series’ main character Commander Shepard is nowhere in the game, instead it focuses on a Cerberus agent who decides the organization has gone too far. Infiltrator is the story of Randall Ezno’s mission to take down the group he’s worked with for years.

The team behind the fantastic Dead Space for iOS and Android created Mass Effect Infiltrator. Infiltrator doesn’t use the severing limbs mechanic of Dead Space, but it does feature a lot of shooting and biotic powers from the Mass Effect universe. 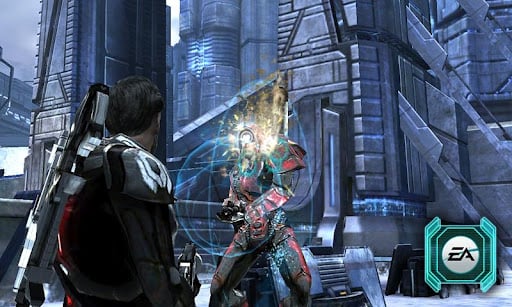 EA released the iOS version of Mass Effect Infiltrator back in March, around the same time as Mass Effect 3. The iOS version costs $2 less ($4.99 compared to $6.99), and works on both the iPhone and iPad. The Android version works on Android smartphones and tablets, though some users say the game isn’t working on the HTC One X, despite the Play Store saying it is compatible.