“May the 4th Be With You.” Odds are good that you’ll hear this multiple time today from Star Wars fans who cannot get enough of the annual Star Wars celebration that takes a funny pun on the May the Force Be With You quote said in every Star Wars movie at least once, in at least one variation.

Disney and Lucasfilms even get in on the fun with official May the Fourth be with you delivering deals and fun for fans across the globe.

The May the 4th be with you saying dates back as far as 1979 when a congratulatory ad for Margaret Thatcher read, “May the Fourth Be With You, Maggie. Congratulations.” Since this ad appeared in the London Evening News Star Wars Day grew in popularity and there are celebrations, parties, deals and all types of entertainment and fun.

What to do and where to save on Star Wars Day. Image Lucasfilm.

Here are 5 things you need to know about Star Wars Day and how you can score deals on Star Wars merchandise, games and even how you can make a Star Wars StormTrooper mask out of milk jugs to celebrate.

This year Star Wars Day comes with stronger Force as we will see a new Star Wars Movie and a new Star Wars game in 2015. Star Ways VII: The Force Awakens arrives in December and the Star Wars Battlefront 3 release date is a few weeks earlier.

May the Fourth Be With you and also with your wallet. You can save on Star Wars games for PC, PS4, Xbox 360 and Ps3 now. You still cannot score a Star Wars Battlefront 3 deal, but you can save on a lot of games.

There are an insane number of Star Wars deals on toys, clothing and merchandise. The list is too long to include everything, but some of our favorites include;

You can check out more Star Wars Day Deals if you want to save a little cash.

This is as good of a time as any to get your Star Wars Battlefront 3 pre-order in so that you lock in your early access to free DLC that bridges the gap between the game and the new Star Warts movie.

Here’s everything you need to know about Star Wars battlefront 3 right now. You can [easyazon_link identifier=”B00W8FYFBU” locale=”US” tag=”gbm-ea-20″]pre-order for $59.99 or the deluxe edition for $69.99[/easyazon_link].

The movies are available on iTunes, Google Play, [easyazon_link identifier=”B00VJ04TH0″ locale=”US” tag=”gbm-ea-20″]Amazon[/easyazon_link] and on Xbox and Playstation.

Make a Storm trooper Helmet Out of Milk Jugs 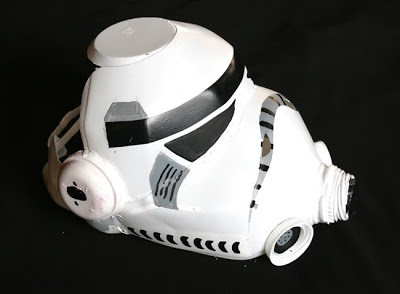 Fifth Wizardry shows how to make a Storm Trooper helmet out of milk jugs.

If you have two empty milk jugs, some white spray paint, electrical tape and a black magic marker you can make a Storm Trooper mask in a few minutes. You just need to cut, spray and draw your way into looking like a Storm Trooper

Use this detailed guide to make a Storm Trooper milk jug helmet. A hot glue gun is advised, but if you decide to make this in your office today you can probably get away with tape if you only need them to last through Star Wars Day.

Related Topics:May the 4thMay the 4th be With YouMay the Forcestar warsStar Wars Day