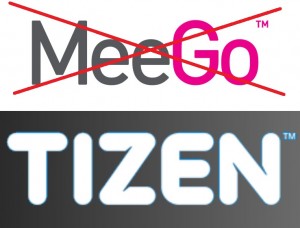 This Is My Next… is reporting that the muscle behind MeeGo has atrophied so it will become a corpse. But there appears to be a re-animation and re-naming in the works.

MeeGo was the open source OS that came out of a joining of Maemo and Moblin, and given a real push by Nokia and Intel. It always seemed to be hovering around the edges and news would occasionally pop up here and there. But the landscape changed. Nokia got in bed with Windows and that took any real focus away from MeeGo.

Well, the landscape continues to change, and it appears that Google’s recent acquisition of Motorola Mobility, and perhaps Samsung’s legal battles with Apple, have led to the formation of yet another alliance that includes The Linux Foundation, Intel, Samsung, and the LiMo Foundation. The re-animation is going to be called Tizen. Tizen will focus on HTML5 web apps and support a bevy of mobile devices from phones to tablets as well as smart TVs and entertainment in autos. Supposedly we will see devices mid-2012.

The MeeGo folks are already urging their compatriots to make the switch and Intel is telling developers to keep building Apps for MeeGo based hardware already on the market that will also run with Tizen. That’s mostly Netbooks (but not that many) in case you’re wondering.