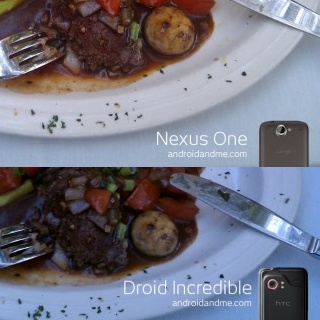 Courtesy of Android and Me

Usually I’m quick to point out that a camera’s megapixel rating is a poor indicator of quality. But in the case of the Droid Incredible and Nexus One, two nearly identically spec’d phones from HTC, I assumed the 8MP DI camera would outshine the N1’s 5MP. Appears that’s not so.

Android and Me has a series of comparison photos shot from both cameras under varying circumstances. The test shots were done both indoors and outdoors, without and without flash. The Nexus One sports a 5MP camera with LED flash. The Droid Incredible boasts 8MP with dual LED flash. Based purely on that, the DI should beat the N1 handily, but it didn’t.

In many cases the cameras came up even, but the N1 edged the DI in several areas, including indoors using the flash and outdoors in indirect light (shown here). Click on through to judge for yourself. The DI’s one major advantage is camera settings, which would conceivably allow it to outperform the N1, but the author makes the point that a cameraphone should adjust automatically. At the very least, the DI’s quality on the default settings should match the N1’s.

So once again, we see that megapixel rating is not an indicator of camera quality. No shock there, but the disparity in quality between two devices from the same manufacturer released just months apart baffles me. If this was a comparison against the Motorola Droid or Apple iPhone, I wouldn’t give the mp rating much weight, but these are both Android-based HTC phones from the past few months. I have to wonder if they used a different camera just to take advantage of the megapixel myth.