MetaWatch Claims It Can Ship The First iOS 6 Compatible Smartwatch

After the success of the Pebble there’s another potentially popular smartwatch on Kickstarter: the MetaWatch Strata.

While both the Pebble and the Strata are smartwatches that gain funding through Kickstarter, that’s essentially where the similarities end. The MetaWatch Strata comes from a company that’s made smartwatches for eight years, most notable as part of Fossil’s Watch Technology division.

MetaWatch is now trying to ship the first iOS 6 compatible smartwatch in September, just weeks after its Kickstarter campaign will end. The watch will connect to iPhone and Android devices with Bluetooth 4.0 and can receive alerts for emails, phone calls, SMS messages, and more, like the Pebble. Also like the Pebble, the Strata features a vibrating motor for alerts and silent alarms.

The Kickstarter page for the MetaWatch Strata takes a few digs at the Pebble by showing off prototype watches, and pointing out that the watches in the video receive live updates throughout the few minutes. The page also puts a high priority on the design of the Strata, describing it not only as a useful device, but also as a fashion accessory. 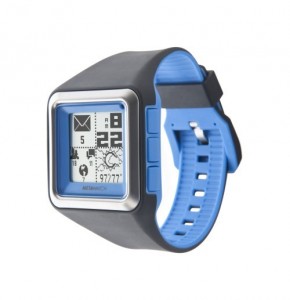 We like the design of the Strata, and we believe MetaWatch is capable of shipping on time, mostly because it has a long history of shipping watches.

The campaign ends on August 20, and has a goal of $100,000. The current total is about $10,000, which is pretty good for the first few hours. A pledge of $159 will secure a watch in one of four colors. There are limits on all tiers, but once backers claim all the watches in the first shipment backers can choose a higher-priced tier and get the watch in November instead of September.