The race to be the first carrier to offer a 4G LTE smartphone running on Google’s Android operating system is heating up to be a nice race between national carrier Verizon Wireless and regional carrier MetroPCS–both providers will offer a multi-mode 4G LTE smartphone(s) that will connect either to a 3G CDMA network, which offers more coverage, or 4G LTE, which offers faster coverage, but is in more limited areas at this initial stage of 4G network deployment. 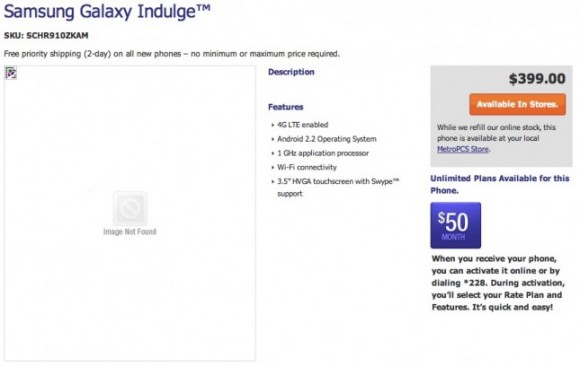 MetroPCS has put up a landing page for a Samsung Galaxy Indulge smartphone, running the Android 2.2 operating system on a 3.5-inch HVGA display. As the display is lower resolution than the WVGA or FWVGA employed by today’s high-end smartphone, the Galaxy Indulge may sit between a mid-tier handset based on its display and a high-end smartphone based on its faster 4G connectivity. As such, it is not a member of Samsung’s elite Galaxy S Android flagship smartphone family, but does bear the Galaxy moniker.

The Galaxy Indulge has been leaked previously as the Samsung R910. The device is expected, like the higher-end Galaxy S, to utilize a 1 GHz Samsung Hummingbird processor.

At CES, Verizon Wireless had announced 4 LTE smartphones–one each from HTC, Samsung, Motorola, and LG–but those devices have not launched yet.