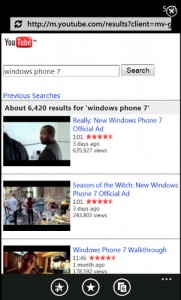 Microsoft is claiming that Google is preventing YouTube from working properly with Windows Phone 7, which lends to a sub-par YouTube experience on devices running on Microsoft’s mobile OS as compared to Android or even iOS devices. According to the Redmond, Washington software giant, Google’s support of YouTube on Android is natural given that Google owns both YouTube and the Android OS development, but that YouTube support on iOS trumps that of Windows Phone 7 is because Apple doesn’t compete with Google on the core business of Internet search. In a blog post, Microsoft is making claims that it is willing and ready to implement a better YouTube experience on Windows Phone 7 handsets and is awaiting for Google to make that happen:

…in 2010 and again more recently, Google blocked Microsoft’s new Windows Phones from operating properly with YouTube. Google has enabled its own Android phones to access YouTube so that users can search for video categories, find favorites, see ratings, and so forth in the rich user interfaces offered by those phones. It’s done the same thing for the iPhones offered by Apple, which doesn’t offer a competing search service.

Unfortunately, Google has refused to allow Microsoft’s new Windows Phones to access this YouTube metadata in the same way that Android phones and iPhones do. As a result, Microsoft’s YouTube “app” on Windows Phones is basically just a browser displaying YouTube’s mobile Web site, without the rich functionality offered on competing phones. Microsoft is ready to release a high quality YouTube app for Windows Phone. We just need permission to access YouTube in the way that other phones already do, permission Google has refused to provide.